“Three hours of the most effortful, least edifying reality documentary I have seen for a fair while.” 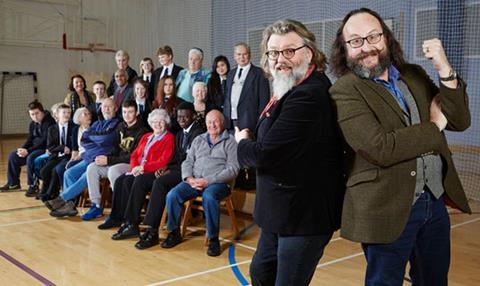 “Old School with the Hairy Bikers does, on the upside, take the unsanitary-looking duo out of the kitchen, for which my OCD is always grateful. But on the downside, it puts them into three hours of the most effortful, least edifying reality documentary I have seen for a fair while.”
Lucy Mangan, The Guardian

“Dave Myers suggested that Old School with the Hairy Bikers was Grange Hill meets Last of the Summer Wine. That was unwise, for there was little drama and less comedy. What we did get were fresh eyes on folk whom many of us might ignore, either in embarrassment at what we were, or dread at what we might become.”
Andrew Billen, The Times

“The bikers were the ideal choice for this experiment. Both had a difficult time in adolescence — Dave had to miss months of school to act as carer to his parents, while Si’s father died when he was eight. They didn’t harp on hard times, but they weren’t afraid to confide in the children and build up a bond of trust.”
Christopher Stevens, Daily Mail

Children of the Frontline: the Escape, Channel 4

“The heart of the film is not so much the journey through Asia and Europe as the journey through grief – a wisely counterinstinctive avoidance of the obvious by photojournalist Marcel Mettelsiefen that ensures the family’s individuality and humanity is retained.”
Lucy Mangan, The Guardian

“The unreserved welcome the family received from a small German town was shaming. As an escape story, however, the follow-up (happily) lacked jeopardy. In addition, its editing assumed too much knowledge from us of the conflict and this engaging family’s previous life amid the Syrian middle-classes.”
Andrew Billen, The Times

Behind the scenes: Children of the Frontline: the Escape

“The sight of penguin chicks snuggling up to soft toys, so that they don’t become too attached to humans, is fascinating and adorable — as is the makeshift steam bath invented to help a penguin with a wheezy chest breathe more easily. Penguin A&E made a perfectly good show. So what was the point of ‘With Lorraine Kelly’?”
Christopher Stevens, Daily Mail

“In last night’s show, pairs of inveterate shouty savers were sent on holiday to see how cheaply they could do it. This provided insider revelations and other stuff presented as some kind of Fifth Gospel but actually what every cash-stretched family had been doing since the dawn of time.”
Matt Baylis, Daily Express