“A commendable and compelling window on an appallingly bleak world.” Read on for the verdict on last night’s TV. 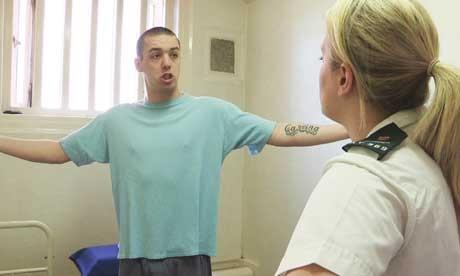 “It’s very disturbing television – not just the violence but the noise, too, a hellish cacophony of metallic banging, clanking and shouting. It’s also brave and admirable television, too. Prisons in this country haven’t been open to much filming before; I imagine this involved an awful lot of negotiation between TV people and governors and justice departments.”
Sam Wollaston, The Guardian

“Through some glitch in the system, Paul McGann’s commentary was missing from the version of Her Majesty’s Prison – Aylesbury that I watched and it says something about the construction of the film that I barely noticed. “Welcome to hell” – a cheery greeting caught in passing from one inmate – provided most of the information you needed to know and it was easy enough to work out what was going on once you were 10 minutes in.”
Tom Sutcliffe, the Independent

“Of the 18 to 21-year-olds who live there, “90 per cent of them are absolutely fine”, said one officer. In the first part of Lee Phillip’s cutting new documentary series, the other 10 per cent got around 90 per cent of the screen time.”
Alex Hardy, The Times

“One complaint: we were told each interviewee’s generic crime, but were given no specifics. This struck me as bottling it: we should have been trusted to hear some details, react with revulsion, and yet still feel a degree of empathy towards these young fellows against whom life’s cards seem so grimly stacked. Otherwise, this was a commendable and compelling window on an appallingly bleak world.”
Mark Monahan, The Telegraph

“This had the feel of a taut and unsettling half hour that had been obliged, by scheduling consistency, to fill out an hour, so that several sequences dragged conspicuously… The twist in our perception of the leading character, a young woman who wakes to find herself in a nightmare, was a good and provocative one. It’s just a pity that the drama hung around so long after we’d got the point.”
Tom Sutcliffe, the Independent

“Last week’s profoundly warped love story was perhaps more focused, and by the end of White Bear I had rather had my fill of Crichlow’s wailing. Also, the closing five minutes showing the behind-the-scenes preparation felt redundant: we’d got the picture by then. Still, this was an exciting and efficient piece of narrative rug-pulling that mocked, above all, our insatiable, neo-Medieval thirst for humiliation repackaged as entertainment.”
Mark Monahan, The Telegraph

“It was like having your brain flossed by pipe cleaners – some of them made from Brillo pads; some from feathers. That was how my mind felt after the caustically thought-provoking Black Mirror, which first thumped with a heavy hand, then tickled in its very last minutes… It has not yet been confirmed whether Brooker, as punishment for making such a terrifying piece of TV, will be made to watch it on loop until he says sorry.”
Alex Hardy, The Times

“Like The Hunger Games plus The Truman Show plus The Gadget Show plus Jeremy Kyle plus Big Brother plus Dawn of the Dead plus Sean of the Dead plus Groundhog Day plus a lot of morons with phones, all snorted into Charlie Brooker’s head where it can fester and go off a bit and gather darkness… before getting vomited out – projectile vomited – on to the screen. I actually preferred the first one. It was more human, and felt more of an individual drama in its own right. This is more brutal and bleaker. Nastier. And still probably about the most imaginative television around right now.”
Sam Wollaston, The Guardian