TV Critics: House of Fools; Death in Paradise; The Taste

“Gleefully absurd, endlessly imaginative and shamelessly stupid.” Read on for the verdict on last night’s TV. 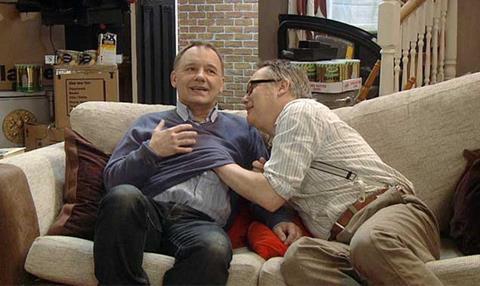 “What a joy it was too to see Vic Reeves liberated from his spot on the Hebburn sofa and flinging himself about the place once more. They may be older, but thankfully they’re no wiser, this was The Young Ones with M&S V-necks.”
Ellen E Jones, The Independent

“Not every gag hit the mark but if one didn’t, another soon came along. It was all gleefully absurd, endlessly imaginative and shamelessly stupid. It was giggle-inducingly, infectiously funny to watch middle-aged men behaving like overgrown children. Long live the new TV silliness.”
Michael Hogan, The Telegraph

“Vic and Bob have taken an established genre and shaken it up like a snow globe. Then they’ve cut a hole in the wall, stuck Vic (in his pants) through the hole, stretched out his ball sack, further and further … Ow, then let go. Thwack, House of Fools hits you, slap in the eye.”
Sam Wollaston, The Guardian

“You know if you’re in the Vic & Bob club or not, and this new sitcom won’t push you either in to or out of it. As with all of their shows, it is a mash-up of words, ideas and insanity, bent by the hammer of surrealism into the most curious of shapes.”
Alex Hardy, The Times

“The main concern when the BBC announced Ben Miller would be leaving last year, was whether the replacement would be up to par. So far at least, Kris Marshall has proven himself to be a winning alternative.”
Rebecca Smith, The Telegraph

“As he bounded around his office, waving his arms and emitting sudden yelps, it all seemed terribly familiar. But it wasn’t until he jumped into a motorcycle sidecar that the penny dropped: he should have gone by Tardis, because his flamboyance was straight out of Doctor Who.”
Christopher Stephens, Daily Mail

“A comedy drama that is competent, definitely, but also so unchallenging it can feel like televisual baby food.”
Alex Hardy, The Times

“Nigella is good at flamboyant creaminess but awkward with the contestants, possibly unaccustomed to being around such ordinary folk. Then there’s the tastivision issue; it’s not like The Voice, the viewer can’t share the experience. And the whole format is overcomplicated to the point that it overshadows everything else, including the food.”
Sam Wollaston, The Guardian

“It’s really difficult to make a TV programme that is both constantly frantic and ceaselessly boring. But Channel 4 have certainly managed that with The Taste. The competitors cooked, their dishes were judged, one was sent home. It was all so prosaically derivative that Channel 4 clearly thought they had to ramp up the tension with every production trick in the telly book.”
Neil Midgley, The Telegraph