“While occasionally gut-churning, this was a tremendously intriguing exercise.” Read on for the verdict on last night’s TV. 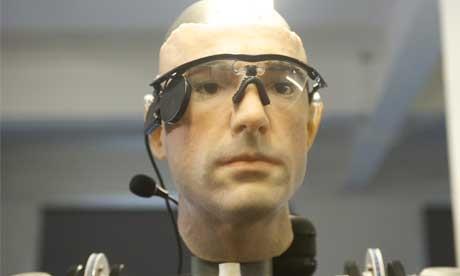 How To Build A Bionic Man, Channel 4

“While occasionally gut-churning – I don’t need to watch another heart being cut out of someone for a while – this was a tremendously intriguing exercise, raising all sorts of tricky questions – about the nature of humanity, our future relationship with machines and its eventual cost, and the best way to spend quality time with one’s mechanical doppelganger.”
Tim Dowling, The Guardian

“What Dr Meyer did, or rather the roboticists who were helping the programme out, was to construct a hi-tech mannequin that could be operated by remote control. It no more had life than a Guy Fawkes figure fitted with roller-skate wheels. But in fussing over this dubious MacGuffin, they used up a lot of time that might have been better spent exploring ethical and psychological dilemmas that were only glanced at in passing… It’s amazing how far scientists have come in replicating human body parts. Mildly depressing how far producers will go to whip up ersatz excitement when the real thing is there for the taking.”
Tom Sutcliffe, The Independent

“The great thing about Meyer was that despite his high-tech extra part, his training as a psychologist, and his Swiss rationalism, he emoted like mad… The programme had many astounding moments… but they all led to the prediction that science will soon make better body parts than nature does. The film’s motifs were Frankenstein and The Six Million Dollar Man but it was the Super Soldiers from The X-files who marched into my mind.”
Andrew Billen, The Times

“Being a Swiss psychologist, Dr Meyer kept himself detached as he examined the thrilling and jaw-dropping innovations being made in the field… The cool, calm, balanced approach unravelled when all the body parts were assembled to make a bionic version of Dr Meyer. Seeing his reaction, which was one of hurt, embarrassment and anger, reminded this reviewer that there’s more to a human body than mere mechanics.”
Matt Baylis, Daily Express

“The episode had the feel of a glamorous soap – a bit like Desperate Housewives – but with fewer catfights and a better soundtrack. The scenes are slick, the setting authentic and the costumes straight out of Dolly Parton’s wardrobe.”
Sarah Rainey, The Telegraph

“Nashville is a title with a distinguished pedigree, and if you’re after a premium slice of heartland Americana I’d still point you to Robert Altman’s film of that name. If you want a standard showbiz melodrama, though, you might find More 4’s latest American import to your taste, effectively Dallas with steel-string guitars instead of oil.”
Tom Sutcliffe, The Independent

“In spite of the arid surroundings, the plot, concerning a murdered British soldier, is an intriguing one, drawing in trigger-happy private security companies and fiery-eyed Mujahedin with Millwall accents. Unfortunately, instead of being allowed to create a story and enhance our enjoyment, the Afghan setting gets in the way, deployed with ever-increasing clunkiness to put across a Radio Four-style debate about the justice of the war.”
Matt Baylis, Daily Express