“A deliciously creepy view of the almost-future.” 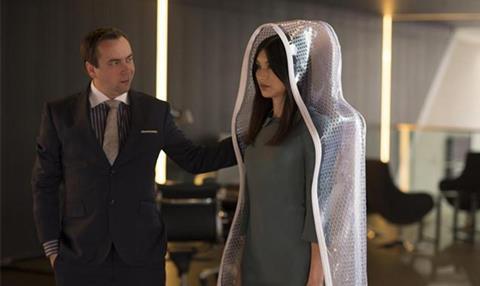 “Humans is a deliciously creepy view of the almost-future, where every household has a synth robot to do the humdrum tasks. This show takes all our delight and out unease about technology and plays them back to us, showing how easily, how swiftly and irreversibly our world changes for convenience’s sake.”
Matt Baylis, Daily Express

“Humans has done a particularly good job of creating an uncomfortably plausible setting in a parallel-present London. It allows the show not only to play on our age-old fears about out-of-control technological advancement, but also on a more mundane middle-class unease.”
Ellen E Jones, The Independent

“It’s sci-fi for the non sci-fi fan, sci-fi that has more than a foot in sci-fact. It’s also a clever, high-energy thriller. So you’re sitting on the edge of your seat, but maybe you’re also resting your chin in your hand, as you ponder technology, intelligence, consciousness, humanity, who we are and how we live now, and so on.”
Sam Wollaston, The Guardian

“Originality is a problem for Sam Vincent and Jonathan Brackley’s serial. Yesterday’s first episode of eight was nothing like as thrilling as Blade Runner, while Black Mirror would have wrapped up its ethical dilemmas in an hour. Humans is properly unsettling, albeit in a familiar way.”
Andrew Billen, The Times

“There was much good human acting and creepy robot acting. But with seven episodes still to come, it’s hard to imagine working up strong feelings for these robots with feelings. As a dystopian sci-fi police thriller satirical family drama, Humans felt like it was suffering from conceptual overload and in need of a reboot.”
Jasper Rees, The Telegraph

“A story doesn’t have to be original, so long as it’s well told, and Humans combined a witty script with a superb cast. Humans has the potential to become a major serial with multiple story strands. And if it inspires tech firms such as Apple and Google to stop mucking about with telephones, and invent a proper robot, so much the better.”Christopher Stevens, Daily Mail

“It could have staggered on to Channel 4 like a seedy velociraptor with stage fright, but a high-energy start recalled the gateway to the weekend at its most brilliantly silly and boisterous. It made this sober viewer feel about as drunk as his former sixth former self, circa 1998 – and that’s a good thing.”
Simon Usborne, The Independent

“With the cream from the old guest list, from Ewan McGregor to Shaun Ryder, and the silliest of its old stunts revived, the show was glorious fun, although the more Evans turned to contemporary musicians and stars, the less certain it felt.”
Andrew Billen, The Times

“It was, for the most part, zany, anarchic fun, fizzing with ideas and conducted at a frenetic pace, but the one off return of the Nineties didn’t so much evoke nostalgia for the decade as a sense of wonder at how we ever kept up the pace.”
Neil McCormick, The Telegraph