“Thoroughly researched, wittily presented and genuinely original.” Read on for the verdict on last night’s TV. 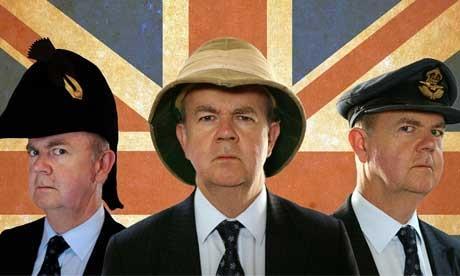 “Hislop snuffles out a fascinating route from Tudor va-va-voom to icy Victorian reserve. Sometimes I get a bit lost and can’t see how something fits in, but that’s just me not keeping up, and it really doesn’t matter because the stories are such a hoot.”
Sam Wollaston, The Guardian

“He stays alert to the fact that a history of feeling can never be quite as categorical as a history of battles. Contradictory emotions exist simultaneously, and ambiguities of response will further confuse the picture… But Hislop finds ways to bring a bit of order to this muddle.”
Tom Sutcliffe, The Independent

“Your humble reviewer found this programme fascinating: thoroughly researched, wittily presented and, best of all, something genuinely original: full of facts and theories we hadn’t heard.”
Matt Baylis, Daily Express

“Although our presenter was not meant to be taking sides, we would have known where the dry-eyed satirist was coming from even if he had not, in a sepia-tinted sequence, guyed a Georgian fop weeping on a chaise longue while reading Richardson’s Clarissa. Gradually, his normative ideal Britishness emerged: feel, please, but you don’t have to show us you’re feeling.”
Andrew Billen, The Times

“People I know and whose judgment I trust (did trust) have told me they think it’s funny. But the girl (Tamla Kari) is so dippy that it’s hard to feel anything for her except annoyance. The comedy is mainly based around the generational/ideological gap and tension between husband (Andy Samberg) and dad (Greg Davies); but it’s overdone, forced, not recognisable or real. Nor is it surreal, or bold. It’s just a little bit silly really.”
Sam Wollaston, The Guardian

“I adore this show but there was too little Cuckoo in it last night… Greg Davies acted stoned-dad-at-a-career-ending party brilliantly, but it’s Cuckoo’s show. We want Cuckoo.”
Andrew Billen, The Times