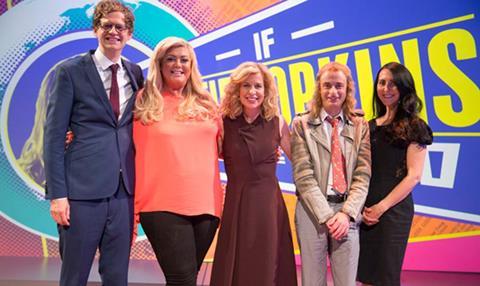 “Katie is contentious and offensive, which, to be fair, she’s rather good at. But the level of debate isn’t the very highest. You wouldn’t expect it to be, though. More disappointing is that it doesn’t turn into an actual fight.”
Sam Wollaston, The Guardian

“Hopkins gave the impression of a woman who desperately wants to be liked, yet can never quite manage to think before she speaks. TLC is banking on compulsive rudeness making for compulsive viewing, but her contributions to this episode were routinely upstaged by the more experienced TV talking heads on stage.”
Ellen E Jones, the Independent

“Hopkins looked hopelessly out of her depth on camera. She trotted out limp one-liners, took powder-puff cheap shots and gurned desperately at her understandably nonplussed congregation.”
Andrew Billen, The Times

“Although the aim was to induce shock and cringe in participants and the audience, something far more vital and useful was going on. The girls certainly grew in confidence, as well as disgust at the inner workings of the average teenage male.”
Matt Baylis, Daily Express

“It was glorious stuff, though it would have been better for more aerial photography and fewer clunky computer graphics.”
Christopher Stevens, Daily Mail

“Brought back for a final fling at the same time as the uncomfortably similar Coast on BBC2, it now seems just a little bit redundant. It’s not helped by its perverse approach to revealing wonders that really aren’t that wonderful. I’m not sure who would be enticed by such delights.”
Matt Baylis, Daily Express

“There’s something to be said for screening utter nonsense in the height of summer. At an hour, Flockstars would be intolerable. At half that, it’s charming hokum that it’s impossible to take against.”
Andrew Billen, The Times