TV Critics: I'm Spazticus; Who Do You Think You Are?; Britain's Lost Treasures Returned; Love/Hate; Nurses

“Disability doesn’t have to be a joke-free zone. And I for one was LMFAO.” Read on for the verdict on last night’s TV. 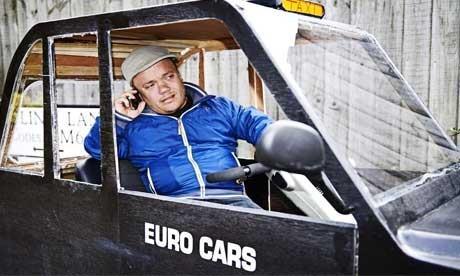 “I’m Spazticus is proper hilarious. I’m sure plenty of people won’t think so. Ooh, you can’t do jokes about that, they’ll say. Yes you can, and these people did, because disability doesn’t have to be a joke-free zone. And I for one was LMFAO.”
Sam Wollaston, The Guardian

“It is funny enough… I struggle, however, to discern its point. If the general public was to behave badly towards the disabled pranksters, that would be interesting. The victims, however, behave at all times with great tolerance. Is the joke that we have become too reverential towards disability?”
Andrew Billen, The Times

“The long-running BBC series has felt stale for some time but occasionally they pull out an episode with the emotional force of the early days – it happened recently with Minnie Driver and again last night with Lesley Sharp… It was hard not to cry.”
Sarah Hughes, The Independent

“Sharp’s [adoptive] father Jack had cared for her, just as Charles Patient had taken in other people’s children. Across the centuries, people had always done this, some rejecting their offspring, some simply unable to care for them, others happily taking them in. Families are made that way. So are famous actresses. It’s laudable for a show like this to look at all the ways we’re linked to the past.”
Matt Baylis, Daily Express

Britain’s Lost Treasures Returned: How Houghton Got Its Art Back, BBC4

“Dan Cruickshank’s documentary was one engaging piece of TV. Surely, however, only an art historian could have made a programme about Norfolk and referred in it to ‘the sale of the century’ without intending to reference Nicholas Parsons.”
Andrew Billen, The Times

“This was more than a mere Wire wannabe, offering something distinct and compelling in its own right… What pulled Love/Hate out of the ordinary was its treatment of religion… Darren’s refusal to acknowledge God would be commonplace in a drama from the UK. In an Irish series it stood apart, asking difficult questions of both its characters and the audience at home.”

“A system that can provide care at such extremes, assisting both drunken morons and needy veterans without questioning, judging or charging is a wonderful thing. You have to wonder how long it can last, though.”
Matt Baylis, Daily Express