“Å surprisingly watchable hour, even for a non-car buff.” 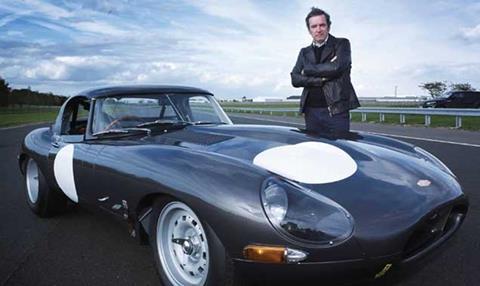 “Some will call it a project born out of tradition and engineering skill. Others might say it’s an exercise in vanity, marketing and money-making. Either way, it made for a surprisingly watchable hour, even for a non-car buff.”
Terry Ramsey, The Telegraph

“With no new Top Gear due until 2016, Channel 4 provided a perfect opportunity for big boys to indulge their love of fast, vintage cars with Inside Jaguar: Making a Million Pound Car.”
Daisy Wyatt, The Independent

“This was a niche programme for the enthusiast and I was surprised to see it go out at peak time on a mainstream channel. What it did achieve was to underline what a good job Top Gear did of making television about cars appealing and entertaining and amusing to a lot of people.”
Sam Wollaston, The Guardian

“The most disappointing thing, given the very special subject matter, was the very ordinary way Inside Jaguar was shot. Of the many things Top Gear has taught us, one is that you can make a car going round a grey-skied race track into something cinematic and stunning. Here the camerawork was pedestrian.”
Alex Hardy, The Times

“Call me po-faced but I found it hard to be excited about cars being flogged for a million quid in a country where there are food banks.”
Matt Baylis, Daily Express

“This could have been a marvellously acerbic documentary. Instead, it was mainly a puff piece about a sports car you couldn’t afford and wouldn’t want anyway.”
Christopher Stevens, Daily Mail

“I can see why some people might have an issue with the title of this show. But I hope they can see beyond it to the way it treats the issues seriously, scientifically, sensibly and sensitively, without being over handwringingly worthy.”
Sam Wollaston, The Guardian

“Here was a programme about child behaviour in which the voiceover infantilised us all. It wasn’t just the constant repetition, it was the trivialising patter, sometimes so daftly written, heavily alliterative and cornily delivered that it was like a nursery rhyme.”
Alex Hardy, The Times

“Ever met someone at a party who seems to have an interesting tale to tell and then, 15 minutes in, an awful truth begins to dawn: they are, in fact, rather boring and obsessive? Well, Deep-Sea Super Predator was like that.”
Terry Ramsey, The Telegraph

“Where this programme really messed up was in a segment looking at killer whales. These huge animals sang, whistled and clicked to each other in an orca symphony — but we struggled to hear it, because the producers laid a mawkish piano soundtrack over the whole scene.”
Christopher Stevens, Daily Mail