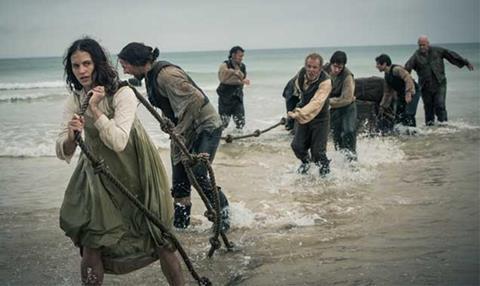 “Square eyes are an occupational hazard of the television reviewer. But bruised ears have become another, because I am compelled so often to resort to headphones — without them, I can’t decode the dialogue. The sound quality was abysmal, and the mumbling of the actors made it worse still. This hugely expensive adaptation of the classic Daphne Du Maurier novel, scheduled to be a highlight of the Bank Holiday, was ruined because no one could follow what the characters said.”
Christopher Stevens, Daily Mail

“If you made it to the final part, congratulations. The sound quality problems, which prompted a boiling sea storm of complaints, have made following the series difficult, despite the attempts of the Beeb to fix them. But even those of us who watched it in preview struggled through the dreary opening episode and the slightly-more-interesting second part. Daphne du Maurier’s story is a classic, but this hard-to-watch (and hear) version is unlikely to have had people gripped.”
Terry Ramsey, The Telegraph

“Set in a beautiful walled garden, it’s a lovely way to spend an hour of your life, with all the gentle charm you would expect of a programme that follows The Great British Sewing Bee in the schedules. And goodness what a steep learning curve it’s proved for me: these people don’t just grow radishes, they trim them before submitting them to expert appraisal. Who knew that a radish could be expertly appraised?”
Hilary Rose, The Times

“An unfunny sitcom set in a nursing home. The weakness of the humour, which mostly consisted of people reciting medical terms for genitalia and looking embarrassed, was the least of its offence. This show is the most rancid dollop of insincere gloop ever served up on telly. It’s written and directed by its star, a man who thinks the entire population is too gullible to see him sniggering behind his hand.”
Christopher Stevens, Daily Mail

“I admit, it is bold of Gervais to create a character like Derek. But he’s done it. There is little new happening here. It was a nice idea but Derek should have ended with the first series. Or even after the pilot. There are reports that a third series is being considered. My advice, for what it’s worth, is: don’t do it. It is possible to have too much of a sloppy, sentimental, embarrassing thing, you know – even when it stars Ricky Gervais.”
Terry Ramsey, The Telegraph

“And what are these amateur documentaries supposed to be, do you ever ask? I suppose a residential care home is a more likely subject than a Slough-based paper company, but I’m wondering if the whole mockumentary idea is a little tired?”
Sam Wollaston, The Guardian