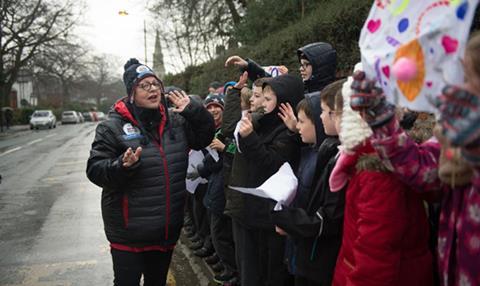 “It might not sound like the greatest television: grim, Goole, gloomy, grumpy. Nor is it really such an extraordinary human achievement. But it’s oddly lovely, and yes a little bit inspiring.”
Sam Wollaston, The Guardian

“Despite the incongruities and almost fathomless futility of this exercise, and the presence of a comedian I personally revere, this show made for some viewing as painful as anything Jo went through. I preferred things when Jo Brand was on the fags and chips diet.”
Sean O’Grady, The Independent

“This was a different sort of celebrity suffering, free from vanity and all the more engaging for it. It would have been nice to get more of a feel for the areas she passed through, but there were compensations in Brand’s occasional soul-baring about her father’s struggles with depression or her own attitudes to adversity.”
Gabriel Tate, The Telegraph

“Walking, as better documentaries have proved, can shine a light into personality. There were shafts of insight here, as when Brand began to talk about her father’s depressions, but the programme was much more entranced by its own nobility. Good on Dame Jo for finishing the course and raising £850,000. Shame on everyone else.”
Andrew Billen, The Times

“She certainly wasn’t embarking on her hike across England on the Pennine Trail for the usual reason that celebs torture themselves on camera — to get their faces on the telly. It appeared her motive really was the best. By the time the show was broadcast she had already raised £850,000 for Sport Relief.”
Christopher Stevens, Daily Mail

“No physical feat of endurance could have asked for a less likely challenger than Jo Brand: overweight, an exercise denier and a massive, funny cynic to boot. She did it all tired, complaining, rude to friends and supporters and hating almost every minute of it. Yet in doing so she raised well in excess of £800,000. There’s nothing so inspiring as the uninspired.”
Matt Baylis, Daily Express

“If you have even a trace of petrol in your veins, know anything about bikes or cars, you won’t be super-surprised by the results, but you’ll enjoy getting there, the ride. And I enjoy Guy Martin’s company, he’s not like everyone else on the telly.”
Sam Wollaston, The Guardian

“For viewers who are not obsessed with torque and traction, the interest lay in watching two presenters, meeting for the first time, who were tipped as Top Gear hosts before Chris Evans took over. On this showing, shy Guy and suave Dave would make an excellent Top Gear pairing.”
Christopher Stevens, Daily Mail

“The tone was perfectly pitched for the target audience, with technical stats presented as Top Trumps and a bit of pit-lane hand-slapping topping up the laddish banter quotient. Both Coulthard and Martin were in the frame for the new series of Top Gear. Certainly, one looks at the latter and then at the effect of Chris Evans’s rampaging ego – already – on the BBC’s motoring cash cow, and wonders what might have been.”
Gabriel Tate, The Telegraph

“You’d have thought that there wasn’t much usefully innovative you could do with stand-up, but Lee and his script editor Chris Morris proved that, well, there is: a masterful reinvention of the witty aside. Every frame of the Comedy Vehicle is freeze-dried to ironic perfection, containing more layers than a mille-feuille pastry, a textural delight.”
Sean O’Grady, The Independent