“There were pleasures here, but this drama was singularly lacking in magic.” 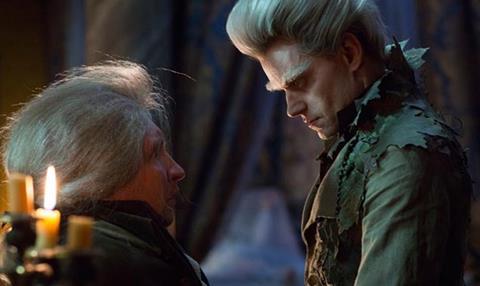 “Eddie Marsan is the sort of character actor who improves everything he’s in, and is perfect as the miserly, reticent Mr Norrell, while Bertie Carvel has all the genial energy necessary to do justice to the young pretender, Strange. A real treat.”
Ellen E Jones, The Independent

“This long-awaited adaptation of Susanna Clarke’s 2004 gothic-comic novel is funny, the acting pleasurable (and only occasionally OTT), the look atmospheric and the story intriguing. Bertie Carvel is in his element as the unsatisfactory, dilatory Strange.”
Andrew Billen, The Times

“On the evidence of this first episode, this Harry Potter for grown-ups appears perilously perched between the comic and the supernatural. There were pleasures here, but this drama was singularly lacking in magic.”
Chris Harvey, The Telegraph

“For a story that promised to tell of supernatural marvels in the Napoleonic era, this was about as magical as a shareholders’ meeting. If your idea of a racy evening is chit-chat in the dons’ common room at an Oxbridge college, then perhaps you found this entertaining. For the rest of us, it was so deathly dry it might as well have been dehydrated.”
Christopher Stevens, Daily Mail

“My problem is a personal one: fantasy simply isn’t my thing. Magic, faeries, Raven Kings, all that, leaves me cold, and I don’t think any spell’s going to bring me round. While you probably saw a fabulous parallel world of riches and intrigue, I just found it a bit silly, to be honest.”
Sam Wollaston, The Guardian

“Brilliant. I don’t think I’ve ever seen real police work laid so bare like this. Respect to the feds, for transparency. And for the honesty from some of the detectives.”
Sam Wollaston, The Guardian

“BBC4’s new Saturday night Scandi-drama oozed ambition, quality and an epic, cinematic scope. Here was a story that, from the off, took you by the hand and pulled you along.”
Gerard O’Donovan, The Telegraph

“To British viewers, 1864 offers a refreshing new perspective on 19th-century history, one in which the Germans are not, for once, the primary aggressors and Britain is humbled to find itself only one of several ‘greatest’ nations on earth.”
Ellen E Jones, The Independent

“There are wonderful things in it. Yet the anti-war, anti-nationalist message is unnecessarily rammed home by the director-writer Ole Bornedal and the present-day, post-Afghanistan framing looks, with six episodes left, like a mistake.”
Andrew Billen, The Times