TV Critics: Just Around the Corner; Whatever Happened to Harry Hill?

“Despite a promising scenario, it turned into a bit of a one-show gag.” Read on for the verdict on last night’s TV. 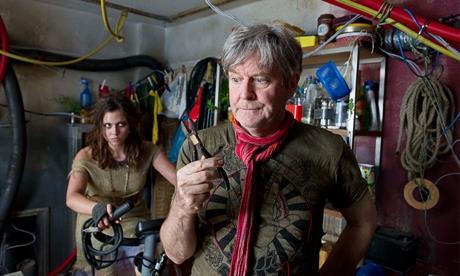 Just Around the Corner, Channel 4

“Despite a promising scenario, it turned into a bit of a one-show gag, the gag being how depraved humans have become.”
Gillian Orr, The Independent

“The script was waterlogged, but much could be forgiven for Daisy Beaumont’s shining turn as terrifying regional tyrant Big Delia.”
Lucy Mangan, The Guardian

“The familiar gentility of it all is, in a way, The Gag, but it’s a good one, helped by top turns all-round.”
Ben Machell, The Times

Whatever Happened to Harry Hill?, Channel 4

“If you were in a mind to be critical, you could say that the ratio of new material to clips, and the comparative levels of invention for each, were quite low… But you couldn’t stay cross for long in the face of the Mattie Mince pledges, the tiny jockeys, Peter Dickinson in the badger grooming bay and other sketches of yesteryear.”
Lucy Mangan, The Guardian

“Provided a giddy Poustian rush back to a certain sort of brightly coloured, anarchic Nineties TV, fostering the kind of nostalgia you can usually only achieve by watching repeats of Eurotrash juiced up on Smirnoff Ice.”
Ben Machell, The Times

“Being a Channel 5 documentary, it was hardly a subtle affair. In fact, it came close to rubbernecking.”
Gillian Orr, The Independent

“These tapes were utterly chilling, not just in their recount of the details but the utter lack of remorse.”
Virginia Blackburn, Daily Express

“I laughed till I cried and begged whatever god is in charge of these things for a whole Lucky Sexy winning series.”
Lucy Mangan, The Guardian

“Is there any school in the country that can rival Waterloo Road in its combination of dysfuntionality and smugness?”
Virginia Blackburn, Daily Express