“This was immersive, important television, and inspiring too.” 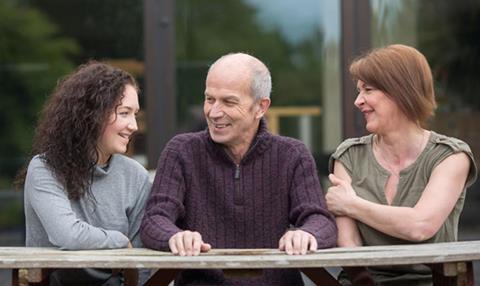 “Living with Dementia wasn’t a programme that particularly lent itself to TV. The confessional style often made it feel like a radio documentary with pictures. But ultimately this was immersive, important television, and inspiring too.”
Michael Hogan, The Telegraph

“With exceptional bravery, Chris and Jane agreed not only to allow a camera crew into their home, but to have wall-mounted cameras recording around the clock in every room, often using night-vision technology. The result was like a nightmarish version of Big Brother, as we spied on the family at their most vulnerable. As Chris’s symptoms worsened, the documentary became almost too upsetting to watch.”
Christopher Stevens, Daily Mail

“The use of diary and domestic footage kept it intimate without feeling intrusive, which is surely the best way of capturing people’s attention and accessibly explaining whatever subject is under scrutiny. But I do sometimes long for companion pieces to such films. What money and help is available. Is it enough? What should we be agitating for? What should we be demanding of our governments as the population ages?”
Lucy Mangan, The Guardian

“Worst of all were the silences. You could almost hear the tension hum and the gears grind as Chris tried to complete his train of thought, locate the toilet or draw a clock face as part of a research study into the illness. When he finally let loose a primal howl of anguish and frustration, breaking down in tears in the arms of his wife, it was almost a relief.”
Gabriel Tate, The Times

“In this brave and heartrendingly sad film the saddest thing of all, perhaps, was how Chris described his decline with clarity and almost complete detachment.”
Matt Baylis, Daily Express

“The humour was blacker than the outside of their elder son’s ‘Spanish chicken’ kitchen catastrophe, but this didn’t diminish the deep humanity and truth in Jo Brand’s and her co-creator Geoffrey Atkinson’s vision. Brand is carving out something of a niche in comedies depicting the welfare state as it crumbles from governmental neglect and rapacious private interests.”
Gabriel Tate, The Times

The Truth About Healthy Eating, BBC1

“Fiona Phillips’s investigation into superfoods ought to have gripped us. But the show squandered its advantage with a dull, plodding review of what foods contain which vitamins. The rest was just repetitive. And Fiona’s conclusions were common sense: anyone who buys goji berries, red quinoa and chia seeds in an organic supermarket is wasting their money. You don’t say…”
Christopher Stevens, Daily Mail