“Night one was amateurish, of course it was, but does everything need to be slick?” 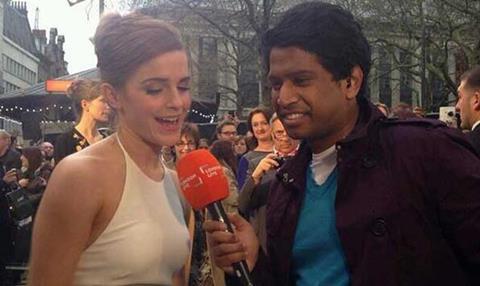 “Shaky camerawork and whizzy angles made viewers seasick. Picture quality was worryingly grainy, as if filmed on a mobile phone. Inane vox pops and awkward handovers were reminiscent of a Chris Morris parody. If nothing else, opening night made for compelling car-crash viewing.”
Michael Hogan, The Telegraph

“Night one was amateurish, of course it was, but does everything need to be slick? The banter from Louise Scodie’s guests was still better than the real One Show’s most nights.”
Andrew Billen, The Times

“The relaxed, irreverent style of Scodie and her lively, funny guests made us feel instantly at home. This was most definitely not The One Show – and all the better for it.”
Ellen E Jones, The Independent

Our Gay Wedding: The Musical, Channel 4

“It was an hour of unbridled joy, an inventive and wholly appropriate way to celebrate the advent of equal marriage. As a musical, Our Gay Wedding wasn’t perfect, but as a wedding it was better than perfect. It was fabulous.”
Tim Dowling, The Guardian

“Our Gay Wedding: The Musical was every bit as jubilant and moving as the title promised. The flow of tears down Till’s face as Taylor crooned his undying love was more powerful than anything all the romcom writers in the world could have put together.”
Ed Power, The Telegraph

“The moment in which the mothers-of-the-grooms sang about their acceptance was crisp and heartfelt. But its poignancy felt downgraded by the fact that Mum and Mum sang weakly, by the ironing board, like a low rent Elaine Paige and Barbara Dickson. I yearned for something more simple that let the story tell itself.”
Andrew Billen, The Times

“I’ve never found Rev laugh-out-loud funny. But when Archdeacon Robert and groom Rob were both taking themselves oh-so-seriously, this episode made me giggle with its gentle mockery of both.”
Neil Midgley, The Telegraph

“This second episode in the new series wasn’t as funny as others have been. It did feel important, though, as individual (Adam) wrestled with his institution (Church) and his conscience. Adam’s quiet chats with groom, groom and God were proof positive that you can mine so much pathos without dressing it up in jazz hands.”
Andrew Billen, The Times

“I get the feeling an awful lot of real vicars contribute to this sitcom and an awful lot of the stuff we laugh at is what we might call the gospel truth.”
Matt Baylis, Daily Express

Nigel Farage: Who Are You?, Channel 4

“There were no awkward questions, no embarrassing flashbacks or soundbites. By the end of the hour, it had turned into a tub-thumping party political broadcast, promising that Sweaty Nige was a thoroughly good bloke.”
Christopher Stevens, Daily Mail

“This was such a cloying tribute, even UKIP supporters must have found it a bit sickly to watch. Martin Durkin not only allowed Farage himself to tell his story, but to do so in a series of relentlessly superficial soundbites.”
Neil Midgley, The Telegraph