“This time it was not the pretensions of his subjects being parodied, it was his own over-familiar format.” 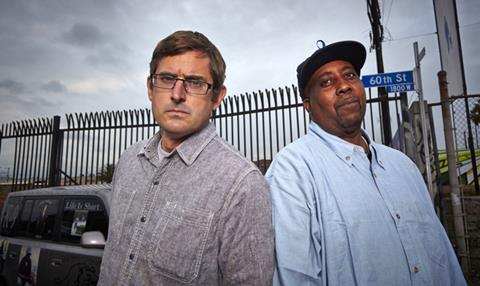 “Theroux’ spent so much time hanging around on similar street corners, you wouldn’t be surprised if the local hoodlums greeted him with a friendly fist bump. The downside of this worldliness was that it rather gave the lie to his innocent-abroad schtick. His voiceovers still sounded parodic in tone but this time it was not the pretensions of his subjects being parodied, it was his own over-familiar format.”
Ellen E Jones, The Independent

“As with many Theroux films, there were too many scenes that led nowhere very much, and too little through-story. It was effective, however, as an un-insistent metaphor for the teary alienation and scary aggression of LA’s human community.”
Andrew Billen, The Times

“A lesser presenter would have got straight outta Compton lickety-split, but Theroux is made of sterner stuff. He stood his ground, even as he became a bit player in When Weaponised Dogs Attack.”
Stuart Jeffries, The Guardian

“Theroux used his standard faux naive technique, wandering around the south Los Angeles gangland, talking to owners with ungovernably dangerous dogs. My one perverse disappointment was that Louis escaped being bitten, even nipped.”
Christopher Howse, The Telegraph

“It was frustrating and then plain annoying to see how Louis was repelled by the dogs that he claimed he wanted to help. Give this show to Clare Balding or Paul O’Grady and they would be falling over themselves to show the spark of love that so many of the dogs had never known.”
Christopher Stevens, Daily Mail

“It’s very hard to know which was worse – Martin Amis’s fiasco of cliches about England or director Mark Kidel’s lame montage of stereotypical images. If Amis were constructing a yawnsome parody of Englishness to satisfy the French TV company Arte France that originally commissioned this, he couldn’t have done a better job.”
Stuart Jeffries, The Guardian

“After a couple of minutes of cliffs, castles and The Lark Ascending I thought somebody would tear a hole through the screen and the camera would cut to the real England. It never did. True, it took 45 minutes to reach the Morris dancers, but Martin Amis’s England held resolutely to military bands, cricket and the Blitz.”
Christopher Howse, The Telegraph