‘There’s precious little good TV through the summer months and this is worth staying in for.” Read on for the verdict on last night’s TV. 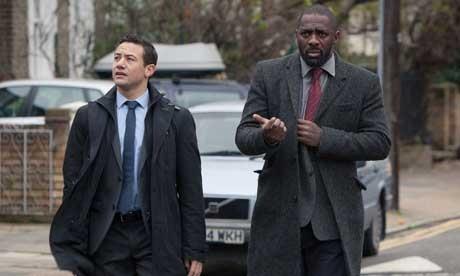 “Let us cheer ITV’s new drama director Steve November for calling for crime drama that was more than ‘another dead girl on a slab’… From the warehouse conflagration in an epic rainstorm at the beginning to the head shoved through the bedroom ceiling at the end, there was bravado to yesterday’s Grand Guignol that was likeable despite itself… Book me a ticket for this season’s ride.”
Andrew Billen, The Times

“The twist for this series is that internal investigators suspect that Luther might be a kind of serial killer himself… But I’m not convinced this twist is enough to make up for the gaping holes in the plausibility.”
Tom Sutcliffe, The Independent

“The way to enjoy Luther best is to stop thinking. Don’t worry about the minor details of wondering if cops really do behave like this. It isn’t meant to be cinéma vérité… There’s precious little good TV through the summer months and this is worth staying in for.”
John Crace, The Guardian

“Idris Elba is so impressively charismatic as the eponymous detective that it is very hard to work out if he’s good at acting or not: it’s sort of beside the point… The drama’s also got a gnarly, pithy, verismo script and is excellently directed, with plenty of artful, grimy urban vistas and a pacing that grips. But I turned off the first episode of the latest and third series 40 minutes into its allotted hour because it was so frightening I found it literally unwatchable… The sad thing is that Luther has now descended into murder porn.”
Serena Davies, The Telegraph

“Yet again a woman was humiliated, murdered and the rest of it, only six minutes after the watershed too, not that anyone with a grain of sense thinks that the watershed means anything… What is the BBC’s problem with women? There’s one example after another in the crime drama category, while over on news and current affairs the disappearance of the middle-aged woman continues apace.”
Virginia Blackburn, Daily Express

“Ludwig would probably have enjoyed Dan Cruickshank’s largely uncritical guided tour. As indeed did I, though it did have the feel of being somewhat truncated; as if certain parts were closed to public viewing. We got plenty of glimpses of the excess but Ludwig himself remained always just out of reach.”
John Crace, The Guardian

“The producers called their final episode ‘On the Buses’. I’m very glad to say that it was much funnier and sweeter than the original.”
Tom Sutcliffe, The Independent

“The writed Nancy Harris here added further distinction to a series of finely nuanced dramas. I’d love to put her and [Luther writer] Neil Cross in a room and see what script emerged.”
Andrew Billen, The Times