“Classier than vin ordinaire, but still an early vintage.” 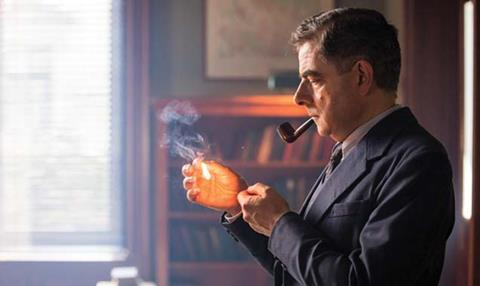 “For those of us who enjoyed beefy Michael Gambon in the role in the Nineties, Atkinson’s less physically imposing Inspector Maigret took some adjusting to. But Atkinson’s chameleon-like qualities gradually asserted themselves. It was too ponderous, at times. But not bad for starters.”
Gerard O’Donovan, The Telegraph

“Events unfolded so slowly via a completely leaden script with so many redundancies in it that I thought my watch had stopped.”
Lucy Mangan, The Guardian

“This avoided grand guignol or, thankfully, any Sherlock archness. But this Maigret could do with giving away a touch more of his own soul if he’s to be our next favourite TV sleuth. Overall, classier than vin ordinaire, but still an early vintage.”
James Jackson, The Times

“What saved this show was its richly imagined vision of Paris in the Fifties. Though it was actually filmed in Budapest, it captured the cobbled streets, the tenements hung with washing, the jazz clubs and the buzz of the outdoor cafes.”
Christopher Stevens, Daily Mail

“For Maigret’s first case, it was alright but rather like a trip on the Paris Metro from the Louvre to Pont Neuf – if you’re a confused tourist, this short, straight line is a godsend but if you’re a consumer of detective mysteries straight lines are a disappointment.”
Matt Baylis, Daily Express

The Island with Bear Grylls, Channel 4

“Bear Grylls’ The Island is a different kind of rubbish but at least when you put a group of eight men and a group of eight women on opposite sides of a remote Pacific island with nothing but a day’s water supply, a couple of machetes and a ’nana each, stuff happens.”
Lucy Mangan, The Guardian

“This time the campers are split into two groups of men and women, and neither party knows the other is there — a twist blatantly pinched from Channel 5’s 10,000 BC. More leftovers and reheated scraps, then.”
Christopher Stevens, Daily Mail

“The only interest in this opening episode lay in trying to figure out why anyone would willingly put themselves through such hell. Good luck to them. For me, the toughest will be sustaining interest in these determined masochists.”
Gerard O’Donovan, The Telegraph

“Gok’s pinched ideas from just about every cookery programme in the hope of creating something original. Unfortunately, this has the opposite effect — it’s like tucking into a plate consisting of all the leftovers in the fridge.”
Christopher Stevens, Daily Mail