TV Critics: Make Me a German; Stephen Fry's Key to the City; Extreme OCD Camp; Steve Coogan, Stand-Up Down Under

“Occasionally the documentary offered insight beyond the slightly idealised image of a land where beer is abundant and childcare costs are low.” Read on for the verdict on last night’s TV. 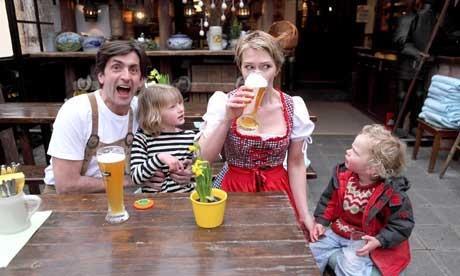 Make Me a German, BBC2

“Within the confines of a one-hour programme, the portrait of the country often relied on stereotypes… But occasionally the documentary offered insight beyond the slightly idealised image of a land where beer is abundant and childcare costs are low… I regretted that the Rowlatts hadn’t been given a few more episodes to integrate, offering more than just a dummies’ guide.”
Theo Merz, Daily Telegraph

“Sometimes the situations are a little forced… [But] the stereotypes are pretty much spot on, it appears (loads of rules, organised, efficient, even with loo paper, Germans are generally naked etc). And this film certainly doesn’t shy away from them. But if they’re broadly true, and broadly positive, why not?”
Sam Wollaston, The Guardian

“To ensure they were indeed average, the Rowlatts emulated the life of an adman’s construct of a typical fictional family, the Müllers with their 1.4 children. This approach, one felt, could only work in a country as homogeneous as Germany.”
Andrew Billen, The Times

“Stephen Fry was of course as eloquent and charming as ever, which was lucky, because the material wasn’t entertaining enough on its own. You were left with one very pertinent question: why is there a beekeeping operation with 30,000 bees making honey on the top of Mansion House?”
Laura Davis, The Independent

“Fry was at his weakest when looking at the City’s current position as a financial centre… A conversation with City grandee Lord Levene, about the banking world’s response to the financial crisis, felt rushed. But that was not the greatest oversight… Fry shared tea and fondant fancies with the delightful Doris McGovern, now in her eighties, who was born and bred within the Square Mile… But not enough time was spent in her company, and little was revealed about what it’s like to live in the heart of London, or how it’s changed within her lifetime. It was a missed opportunity.”
Judith Welikala, Daily Telegraph

“As a set-up for looking at some of the quirkier bits of London life it wasn’t bad… The City is at once a place mired in unchanging traditions and super-modern: a fogey that’s keen in the internet. Dare we say, a little like Stephen Fry?”
Matt Baylis, Daily Express

“There’s always a concern with documentaries on mental illness that they’ll exploit those taking part, so it’s a natural relief when they manage to avoid a sensationalist route… Although none of the six were cured, seeing each so willing to take on the ultimate challenge of confronting something that engulfs their thoughts and determines their daily actions was undoubtedly inspiring.”
Laura Davis, The Independent

“Steve Coogan, Stand-Up Down Under told us nothing about Australia, where the comic toured in 2009. Nor were the extracts from it particularly brilliant. As a portrait of an artist at work, however, it was dangerously revealing.”
Andrew Billen, The Times

The Kids With No Memory, Channel 5

“The Kids With No Memory was a touching tribute to three young people who for assorted reasons found everyday life a struggle.”
Matt Baylis, Daily Express