TV Critics: Man Down; The Secret Life of Brothers and Sisters; Shades of Blue

“It’s not until you switch off that you marvel how any show with this much talent could be such rubbish.” 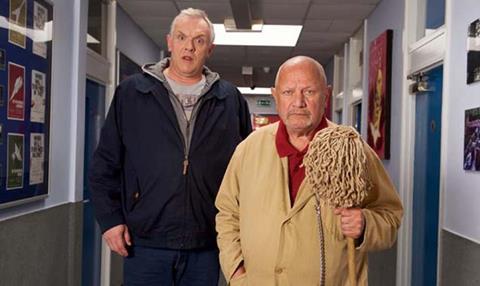 “There are moments of surreal brilliance. But that’s wrecked by every witless obscenity, every infantile poo-belly-bum joke. It’s not until you switch off that you marvel how any show with this much talent could be such rubbish.”
Christopher Stevens, Daily Mail

“For all its impressive cast and vulgar humour, it’s hard to get on board with the characters in Man Down. There are rare moments of comedy gold, such as when Dan slowly pulls a huge wooden splinter from his cheek, but otherwise his quirkier-than-thou friends Jo and Brian are just too bizarre to relate to.”
Daisy Wyatt, The i

“Greg Davies is a good actor, naturally amusing and a very physical comedian. As a former teacher, he writes the scenes set in the school where Dan teaches with real panache. In homes avoiding the news last night, hysteria was entirely possible.”
Andrew Billen, The Times

The Secret Life of Brothers and Sisters, Channel 4

“You could lie to yourself that you were watching the most important behavioural-development study since Kinsey and not just an extended version of Kids Say The Funniest Things. In reality, the programme was an excuse to coo at adorable children playing at being adults, like an hour-long Andrex puppy advert. Cute points: 10, programme points: five.”
Priya Elan, The Guardian

“This episode lacked the original’s simplicity of format and some of its laughs but was still gently fascinating, grin-inducing viewing.”
Michael Hogan, The Telegraph

“Instead of carrying the show off with her star power, Jennifer Lopez’s Santos feels thin and underwritten, a composite of every hard-done-by but resilient character with perfect hair she has played since 2002. In fact, there’s nothing here we haven’t seen before and done better on shows such as Law & Order and the CSI franchise.”
Priya Elan, The Guardian

“This is no big-budget HBO or Showtime series, but the stakes are high, the drama moves fast and there’s a Kanye West soundtrack to boot. If you can deal with cliched lines about ‘all being family’ and a lead policewoman who wears too much blusher, Shades of Blue is admittedly rather watchable.”
Daisy Wyatt, The i