“Mary Berry Cooks is a perfect half-hour of recipes and tips.” 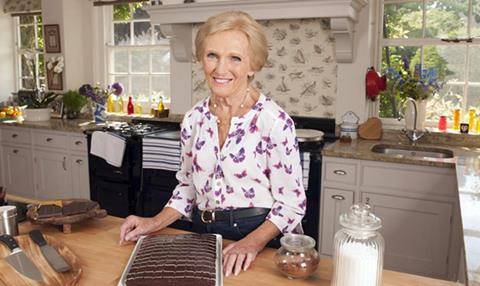 “Mary Berry is a natural on television – she plays a kindly and very British grandmother from a genteel age partly as a culinary Miss Marple. But she is always welcome in our homes, a polite reminder of manners and good diction, and she displayed this amply in Mary Berry Cooks.”
Adrian Michaels, The Telegraph

“Words such as ‘brisk’ and ‘no-nonsense’ were invented for Mary. She’s compact, sweet, twinkly and cheerful — everything a berry should be. Mary Berry Cooks is a perfect half-hour of recipes and tips, teaching us how to recreate Great British Bake Off favourites in our own homes.”
Christopher Stevens, Daily Mail

“Travelogue cookery, with expensive, impossible-to-find ingredients is old hat; simple, budget-friendly family recipes are very much of the moment. This series promises to be a lesson in just that, and delivered by the nation’s favourite home ec. teacher, no less.”
Ellen E Jones, The Independent

“Mary stayed exactly as we know and love her in Mary Berry Cooks: kind, beautiful, skilled and as comforting as cake mix. She was possibly even more lovely on her own, with her granddaughters to spark off instead of hard-edged Paul Hollywood.”
Alex Hardy, The Times

“Mary Berry Cooks is softer, less thrusting, older-fashioned fayre. I learned you can avoid rack marks on a tray bake by using a tea towel and how to feather icing; and that it’s fine to make your sandwiches the day before. Oh and she says scone so that it rhymes with con, not cone, which settles it once and for all.”
Sam Wollaston, The Guardian

Mind The Gap: London vs The Rest, BBC2

“Mind the Gap: London vs the Rest was thought-provoking, intelligent television examining London’s dominance of the UK economy. Too many documentaries are thin and over-long, or sloppily edited. But Evan Davis’s presentation of ‘the economic forces polarising Britain’ felt weighty, well-constructed, thick with content and argument, and intelligently shot.”
Adrian Michaels, The Telegraph

“In this fascinating – though not entirely cliche-free – documentary, Davis visits the incomplete London Gateway container terminal on the Thames estuary to drive a crane, because the first rule of modern documentary making states that the presenter Must Have A Go At Something, even if doesn’t tell you about anything apart from the presenter’s ability to do something he doesn’t normally do.”
Sam Wollaston, The Guardian

“This first hour was visceral as it showed both a city of vitality and brutality. And it also included London’s most vivid and clumsy beacon: its Mayor Boris Johnson. I fear that next week’s episode might solely contain scenes of Boris being dispatched to the rest of the country to apologise for calling it a dry crackerbread.”
Alex Hardy, The Times

I Never Knew That About Britain, ITV

“I Never Knew That About Britain’s insistence that all stories tend towards the glorification of nation was as limiting as the Austin Powers theme music was distracting. There are plenty of little-known stories about this country, of course, but this was too busy adorning the obvious with bunting to uncover anything truly fascinating.”
Ellen E Jones, The Independent