“After a decade it’s feeling like same old same old.” 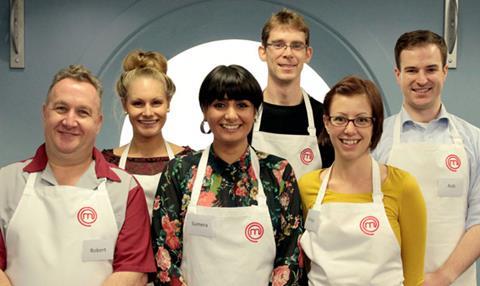 “I’m a teeny bit bored by MasterChef to be honest. By the format, which apart from minor tweaks has remained the same. By John and Gregg and what they say, which has also remained much the same. After a decade it’s feeling like same old same old.”
Sam Wollaston , The Guardian

“To casual viewers of TV cookery contests it feels like it never really goes away, haunting our midweek schedules like a Chandler Bing’s fussball table or DCI June Ackland’s Met-issue blouse. There they are, John and Gregg, Torode and Wallace spooning flan into their gizzards as we do the same at home with our M&S Dine in for £10 gammon. Welcome back, chaps. It hardly felt like you were away.”
Will Dean, The Independent

“This is a ruthlessly efficient TV machine: glossily produced, slickly edited, button-pressingly soundtracked and addictively compelling. A casual viewer might start the show not caring which amateur cook wins. But by the time the credits roll, you’re yelling at the screen.”
Michael Hogan, The Telegraph

“As the series returned in its purest, non-pro, non-celeb, flavour for a tenth season, three past winners, all now restaurateurs, were made to eat three two-course meals in succession. Hope, it seems, springs eternal in chefs, and so does storage capacity.”
Andrew Billen, The Times

“There was more plot and less gratuitous self-congratulation this week, and there were more laughs as well. And did we catch a whiff of office romance between Fletcher and producer Lucy (Nina Sosanya)? She’s no Olivia Colman, Fletcher’s love interest in predecessor Twenty Twelve, but it’s early days.”
Michael Hogan, The Telegraph

“A hint of romance flickered last night, as Hugh and a put-upon producer, played by Nina Sosonya, talked awkwardly in one of the TV centre’s great glass elevators. But on Monday night, there had been another hint of romance for Sosonya when she joined Douglas Henshall’s crime squad on Shetland, as a forensic investigator. Something strange is happening here; we ought to warn Hugh.”
Christopher Stevens, Daily Mail

“At the production meetings for Dead Famous DNA, someone must have spiked the morning coffee with hallucinogenic drugs, because this wasn’t a documentary: it was a bad acid trip. The oddest thing of all was the way that vet Mark Evans clearly thought he was making a normal TV programme.”
Christopher Stevens, Daily Mail