“No tips for making your own boat out of a jam jar. Just good, hard engineering.” Read on for the verdict on last night’s TV. 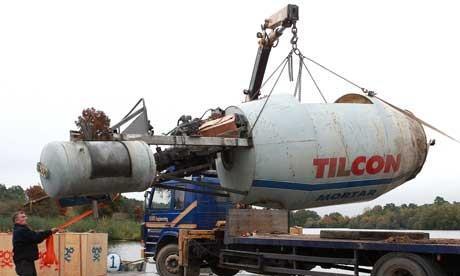 “A blur of overalls, beards and flying sparks, it’s almost note for note the same [as Scrapheap Challenge] except the scrapheap has been scrapped. Instead, each team gets a knackered old vehicle to transform, like a very slow Optimus Prime, into some kind of clanking juggernaut for a final showdown against the clock… Nothing fancy. No tips for making your own boat out of a jam jar. Just good, hard engineering.”
Sam Wollaston, The Guardian

“The first test was to transform two redundant cement lorries into cargo vessels, and it revealed a programme startlingly similar to its inspiration, from the jaunty blackboard animations to the sledgehammer banter between the teams. It isn’t quite as good though, lacking the explanations of simple mechanical principles that ornamented Scrapheap Challenge. It’s almost appropriate really, given that so many of the challenges will involve transforming a machine that did a job well into one that does a job badly.”
Tom Sutcliffe, The Independent

“The show is in its ninth series and there are only so many ways to suggest people spend less money. You can see how frantically the barrel is being scraped in the tips for us poor scrimpers at home, each of which feel like discarded footage from another show: make-and-dos from a budget Blue Peter, blink-and-miss-it recipes for chutney-and-asparagus spears from unsuccessful TV chef pilots, chummy gardening advice from some bloke in a greenhouse. And another: save yourself an hour and consult an actual expert. Or the internet. Or watch something else.”
Sam Wollaston, The Guardian

“If you like gratuitous sex, you can pretty much guarantee that either one of the local women will succumb to Lucas’s apparently irresistible charms or his ex-girlfriend will have a steamy flashback while making love to her whitebread husband. And if you like violence, there’s plenty of that too, if you can actually make it out through the kinetic filming style. But if you hanker after the intelligence that marked out [executive producer Alan] Ball’s big successes, you’ll probably be disappointed.”
Tom Sutcliffe, The Independent

Planet Earth: A Month in the Wild, BBC1

“This was Dumbo as remade by Alan Bleasedale, or the team behind the village… A Month in the Wild became what Planet Earth Live should have been: an epic, animalistic version of Annie’s It’s A Hard Knock Life.”
Alex Hardy, The Times

“This is a great series and the presenter’s quirks and foibles only add to its charm.”
Matt Baylis, Daily Express

“There is something wondrous about seeing the shadows of the past emerge before your eyes. It’s far better on television, in fact, than a million pottery shards or flint axes.”
Matt Baylis, Daily Express