“Mr Selfridge is an entertainment emporium, a new version of Dallas made from Damask, feather boas and fine drama.” 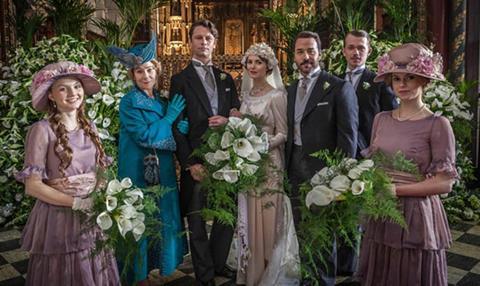 “Mr Selfridge makes Downton Abbey look subtle. As the goodies were slowly unwrapped though it became obvious how many vivid, watchable stories are going on. It’s an entertainment emporium, a new version of Dallas made from Damask, feather boas and fine drama. I’m buying.”
Matt Baylis, Daily Express

“It makes sense. If you’re slumped in your Sunday sofa averting thoughts of another week of graft, the last thing you want is to have to figure out why anything is happening. Just let the momentum wash onwards, keep the characters as colourful and changeable as their costumes, and the romances as sweet, or torrid, as they credibly can be.”
Gerard O’Donovan, The Telegraph

“Mr Selfridge has been searching for an advantage over Downton. As the new series opened, Zoe Wanamaker arrived wearing that advantage on her head. If this hat hadn’t been held in place by pins like knitting needles, it would have lifted off her head and flapped up into the rafters.”
Christopher Stevens, Daily Mail

“It is distinctive, genuinely different. It’s also worrying, beautiful, funny (really), ambitious, serious, gripping and very possibly important. I’m not saying everything now makes sense. But Adam Curtis is at least taking a step back, to look at the modern world, then take it on. And make television like no one else does.”
Sam Wollaston, The Guardian

“To look at, it’s a mesmerising all-you-can-eat feast of impressionistic subtlety. To listen to, it’s something quite different: all concrete determinism and tub-thumping conviction. In the end, Adam Curtis sounds like just another prophet asking us to have faith in his vision.”
Jasper Rees, The Telegraph

“It was, in baldest terms, a documentary about a documentary about the Holocaust. I won’t describe it, only point out that 70 years on tough, old men of a generation not used to pouring out their hearts, wept as they recalled what they’d seen and recorded.”
Matt Baylis, Daily Express

“Saturday’s making-of documentary included sufficient clips for us to realise why television has so far not aired Factual Survey, why no DVD exists, and why even the Imperial War Museum has shown it only once. The military cameramen who on history’s behalf did not flinch were heroes.”
Andrew Billen, The Times

“This was straight-up comfort viewing – low on surprises, with little to scare the horses. Judged by those admittedly narrow standards, the show remains a zesty thrill-ride: blokey and irreverent, with occasional lapses into boyish giddiness.”
Ed Power, The Telegraph