“His morose, loser schtick was a welcome antidote to all the relentless cheeriness and ersatz sentiment everywhere else.” Read on for the verdict on last night’s TV. 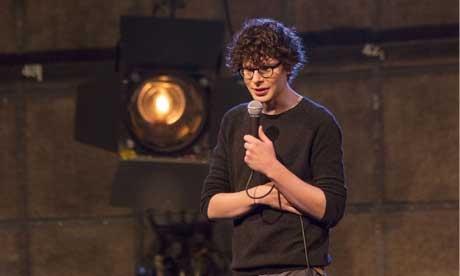 “Normally the idea of a whole hour of a Simon Amstell standup routine would be at least half an hour too long, but in Numb, his morose, loser schtick was a welcome antidote to all the relentless cheeriness and ersatz sentiment everywhere else.”
John Crace, The Guardian

“It takes a rare talent, a genius even, to be depressed and at the same time see how funny you can make that sound to other people. Far from striking a low note for the last programme of 2012, Amstell’s routine filled me with wonder.”
Matt Baylis, Daily Express

“The reason that telly is a bit naff on New Year’s Eve is that we should all be out at a party feeling awkward. Which is why Simon Amstell’s stand-up show Numb, in which he explained just how to do that, was the stand-out programme of the night.”
Alex Hardy, The Times

“While some of the material overlapped with a pretty familiar comic schtick – the self-laceration of the clown who beats himself up before the big boys can do it for him – some of it went a little further than that. He can do straightforwardly funny lines… but the most interesting stuff came much closer to home, as he revealed the details of broken love affairs or his troubled relationship with his father.”
Tom Sutcliffe, The Independent

“A schmaltzy Disney song is just about tolerable if you are stuck inside a warm cinema with a box of popcorn watching the images it was written to accompany: to take away all the trappings and leave us Adrienne Posta, Peter Noone, Matt Monro, Kenny Ball and his Jazzmen and the Black and White Minstrels singing their renditions of Bare Necessities and A Whole New World in ghostly clips of shows from Christmas past is torture.”
John Crace, The Guardian

“A beacon of light on a dark night… What it offered was an hour of classic tunes from Disney films, ranging from Pinocchio in 1940 right down to Aladdin in 1992. Many of them have won Oscars in their own right and hearing them belted out by artists from Lulu to Louis Armstrong, you could see why.”
Matt Baylis, Daily Express

Climbed Every Mountain: The Story Behind The Sound of Music, BBC2

“Started out as seasonal jollity, with Sue Perkins larking around in a dirndl on an Austrian mountain, and ended – rather gratifyingly – with comprehensive de-mythification, as surviving Von Trapp family members testified to Maria’s harsh discipline and bipolar aggression.”
Tom Sutcliffe, The Independent

“The updated version of the Andy Stewart and Kenneth McKellar show would be greatly improved if Jools didn’t so often insist on playing along with his guests. I know my hearing isn’t as good as it once was, but it does sound to me as if he plays exactly the same tune every time his fingers touch the piano.”
John Crace, The Guardian

“Grylls is often a source of unintended comedy and this programme came billed as a brand new production. Only it wasn’t, unless you call splicing together loads of clips from previous series into a slightly different format with another name, a new production… The only thing that could be said in this programme’s defence was there were probably a few people in the centre of London who were eating something even more disgusting at the same time it was being shown.”
John Crace, The Guardian