“This was purely and simply great TV.” Read on for the verdict on last night’s TV. 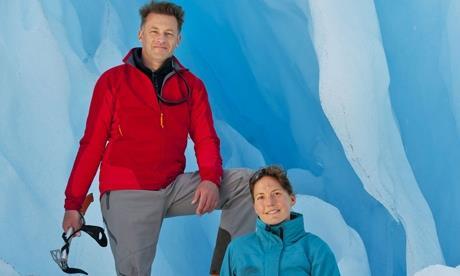 In common with Coast and a lot of other shows in the genre, this was a nature programme sailing close to the shores of science, in which a team of experts and TV presenters was flown to Greenland to watch icebergs cracking off a glacier. On the one hand this was purely and simply great TV. At the same time it contributed all sort of things to our understanding of glaciers, such as how quickly they move and what’s inside them.
Matt Baylis, Daily Express

If, like me, you wondered whether the voiceover was talking up the hazards of sailing in front of the glacier then, like me, you will have been incontrovertibly put right by the event they caught on camera just as they were packing up – the calving of a massive iceberg that churned the sea where the expedition yacht had been into a spectacular and unsurvivable maelstrom.
Tom Sutcliffe, The Independent

I’m sure there was a a great deal of good science going on in here, but this was a programme I’d have happily watched with the sound turned down as the voiceover battered me time and again with the importance and significance of what I was seeing.
John Crace, The Guardian

Combined with his sardonic humour was an earnest appreciation of these sometimes impenetrable cinematic curios, I’m not sure I would want to sit through The Whip and the Body and Daughters of Darkness, but I’m glad he did. Aware that not everyone shares his level of geekery, he opened out the 90-minute programme to explore the political background to each country’s horror cinema.
Ed Potton, The Times

My main reservation about this programme – it was a long haul at a feature-length 90 minutes – is that very few of the movie clips made me feel as if I had missed out first time round by not seeing them. Whether this was my problem or the documentary’s, I’m not entirely sure.
John Crace, The Guardian

I could have handled a slightly less reverential tone myself, given how schlocky quite a few of these films are. But it offered a very crisp introduction for beginners and lots of treats for aficionados too.
Tom Sutcliffe, The Independent

The whole point about a sub drama is that it needs to be mainly filmed on board a sub, but by the end the crew had taken over a Nato outpost in the Indian ocean and were threatening a prolonged stand-off against Washington. And the baddies, whoever they turn out to be. Don’t turn this into another Lost, a show with a brilliant premise that disappeared up its own bum. For everyone’s sake. Get back on that sub. Now!
John Crace, The Guardian