“This was a stimulating hour that made science sound very close to metaphysics.” Read on for the verdict on last night’s TV. 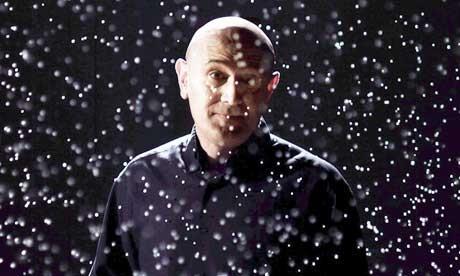 “Al-Khalili is an engaging presenter who gave every impression of being able to make the immensely complicated understandable, but I wasn’t left with a great deal more understanding at the end.”
Tim Dowling, The Guardian

“This was a stimulating hour that made science sound very close to metaphysics.”
Arifa Akbar, The Independent

“This was all surpisingly interesting stuff, not least because it spanned such a range of material.”
Matt Baylis, Daily Express

“The contest itself had been perfectly baked, as far as the producers were concerned. What you don’t want in such things is an over-enthusiastic rise followed by a sudden collapse, but here the tension and uncertainty held up to the very end. It might, in fact, have been plotted by a scriptwriter with first one contestant riding high and then another hitting the crest.”
Tom Sutcliffe, The Independent

“Not so very long ago BBC2 would extract excitement from a Tuesday night in October by transmitting the Man Booker Ceremony… In the decade since the ceremony disappeared from our screens, television has supposedly got cruder and nastier, but I am not so sure. There could be nothing more refined or nicer than The Great British Bake Off, whose final was instead the big competition of the evening.”
Andrew Billen, The Times

“Fresh Meat has clearly eased into a higher gear for its second series. Nothing else on telly is so comically dense: jokes pile up quickly, and you always risk missing something funny by laughing. It’s a brilliant mixture of intelligence and idiocy, deploying complex, evolving characters.”
Tim Dowling, The Guardian

“Given that it’s a sitcom about a student houseshare, Fresh Meat ought by rights to be rammed with spoilt, unsympathetic characters and foul humour. It is all of those things. It is also tack-sharp true and funny.
Matt Baylis, Daily Express

“This would, apparently, show us the real man, and one who was itching to forge a solo career. We’d see new and rarely seen footage. We would, in all of this, presumably learn something new. Did we? We may have done but, overall, it felt rather more like a trip down rock memory lane than an hour of revelation or revisionism.”
Arifa Akbar, The Independent

“A lot of unseen and little-seen footage was used to flesh out the private side of the Queen frontman. What is immediately striking is that even at the height of his fame, he remained, beyond his stage persona, almost unknown.”
Tim Dowling, The Guardian