TV Critics: Our Guy In India; Last Tango in Halifax; Animals in Love; The Secret World of Lewis Carroll

“Guy’s a good travelling companion, open-minded but not worthy, less annoying than the average celebrity.” 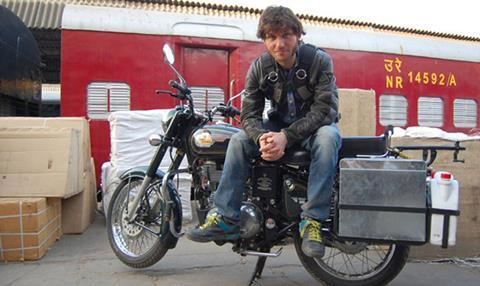 Our Guy In India, Channel 4

“I’m not a big fan of the celebrity television travelogue. But I’ll make an exception for Our Guy In India. Sometimes Guy’s observations are simplistic and cliche. But he does veer from the beaten track. And he’s a good travelling companion, open-minded but not worthy, less annoying than the average celebrity.”
Sam Wollaston, The Guardian

“If you’re not into either motorcycle racing or engineering you may never have come across Guy Martin before, and that would be a shame. He really is one of the most intriguingly idiosyncratic personalities on television and his presence at the centre of Our Guy in India is just what’s needed to get the tired celebrity travelogue genre up to speed.”
Ellen E Jones, The Independent

“The show was fine when Guy was doing what he loved — buying a Royal Enfield bike, or touring a sprawling lorry repair yard. But the producers thought it would be fun to take him into unfamiliar territory. Without an engine and a pair of wheels, the bloke is barely alive. It was downright cruel to watch.”
Christopher Stevens, Daily Mail

“The plotlines have got increasingly soap-like: You could be forgiven for thinking it was Last Tango in Walford. Yet, Wainwright’s development of the families, her empathy with the female characters and her warm and witty dialogue mean the series rises to levels far above its plot twists.”
Terry Ramsey, The Telegraph

“This fine, funny drama reminds me of soap at its best. We closed not quite on a fairytale ending but on complicated people settling for the complicated best. There’s definitely a tango or two left to dance, here. Let’s hope it gets a chance.”
Matt Baylis, Daily Express

“Last Tango looks increasingly like a quadrille waiting for the music to stop. Caroline’s storyline will need a new beginning next year and I am not sure if I am particularly hungry for it.”
Andrew Billen, The Times

“Last Tango in Halifax is a show built around family and romance, but this series has had neither a romantic relationship nor a blood tie at its core. Instead, it’s the deepening friendship between Caroline and Gillian, that’s been the real revelation.”
Ellen E Jones, The Independent

“For fans of both literature and scandal The Secret World of Lewis Carroll was an excellent programme. Presenter Martha Kearney gave us a wonderfully engaging portrait of Carroll and his world. But down that hole she went. It must have been tough to do that to her hero.”
Terry Ramsey, The Telegraph

“My old friend Martha Kearney made an excellent and possibly revelatory documentary about Lewis Carroll. I wish she hadn’t.”
Andrew Billen, The Times