TV Critics: Our World War; Who Do You Think You Are?; Cuckoo

“Much of the acting was palpably ham, with slain German soldiers dropping to the ground like children in a school play” 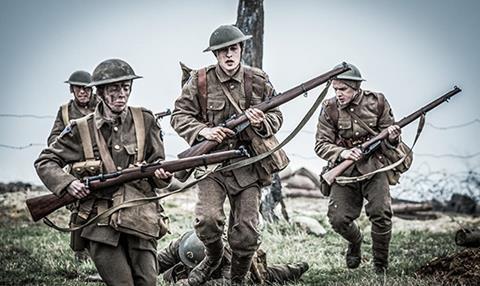 “It still might have misfired like a jammed Vickers if they’d done it badly – significant history trivialised by youth TV. But, as Our War was, this is done beautifully. It works.”
Sam Wollaston, The Guardian

“Faux helmet-cam footage and slow-motion tracking of bullets were also included, which at times gave the thing an unintentional and unwelcome whiff of spoof. And much of the acting was palpably ham, with slain German soldiers dropping to the ground like children in a school play.”
Jake Wallis Simons, The Telegraph

“The extraordinary first episode of the dramatised documentary, Our World War, admitted at once that warfare 100 years ago was “unimaginable”. Taking the adjective literally, rather than merely as an intensifier to “horror”, the director Bruce Goodison and the writer Joe Barton went on to imagine it, brilliantly and innovatively.”
Andrew Billen, The Times

“This was war as Pop Art. It wouldn’t have felt out of place if jagged cartoon captions had erupted with every shell — ‘Ka-Boom!’ ‘Jakka-jakka-jakka!’”
Christopher Stevens, Daily Mail

Who Do You Think You Are? BBC1

“But whether you care enough about celebrities’ long-dead ancestors is dependent on whether their family trees overlap with history. Thankfully, Walters’s past led us through a tumultuous period in Irish history as she learned that her ancestors were involved in the battle for land rights in the late 19th century.”
Rachel Ward, The Telegraph

‘It was a pleasure to see Julie Walters emote her way through a dull first episode of the tenth (tenth!) series of Who Do You Think You Are?. It would otherwise be harder for us to be interested in Anthony Clarke, the great-grandfather that the programme fixated on.”
Andrew Billen, The Times

“Cuckoo remains a lame, forced, family sitcom. Not recognisable or real, not bold or surreal. And not funny, just silly.”
Sam Wollaston, The Guardian

“Twilight’s Taylor Lautner was very good indeed. He affected a weird giggle and a goofy smile which he pulled off very well. All in all, a convincingly whacky, winningly whimsical performance.”
Gerard O’Donovan, The Telegraph