TV Critics: Out of the Jail and on the Streets; Danny Baker's Great Album Showdown; The Year of Making Love; Dancing on the Edge

“The hour was highly entertaining: vivid characters, moral dilemmas, and a narrative drive much drama would envy.” Read on for the verdict on last night’s TV. 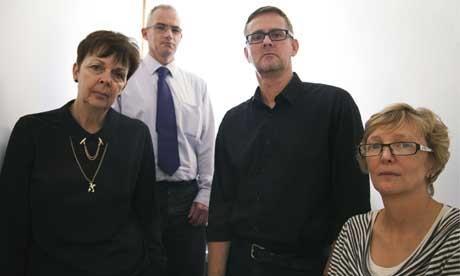 Out of the Jail and on the Streets, BBC1

“An eye-opening documentary about the probation services in Brighton and Chichester. If you’re after a definition of a thankless job, look no further… The decency and professionalism of the male and female officers as they consistently sought to look for the best in the assortment of murderers, rapists and paedophiles who passed through their doors was remarkable… The probation service may be fairly anonymous, but we’d sure as hell notice if they weren’t there.”
Sam Wollaston, The Guardian

“The glaring defect of Out of the Jail and on the Streets, Ben Rumney’s excellent documentary about the monitoring of prisoners freed on licence in Surrey and Sussex, was that it was shown at 10.35pm… The hour was highly entertaining: vivid characters, moral dilemmas, and a narrative drive much drama would envy.”
Andrew Billen, The Times

“After watching Out of the Jail and on the Streets, which afforded a rare glimpse of probation officer’s at work, I have nothing but the highest admiration for these people… We saw officers revolted by sick images on an offender’s computer or steeling themselves for in-depth interviews with rapists and paedophiles. We also saw the genuine pleasure officers took in helping people, sometimes going beyond the strict definitions of their role to offer comfort and support to the most vulnerable. In spite or perhaps because of all their efforts, I found myself wondering how long most officers stay in the job. I certainly know how long I’d last.”
Matt Baylis, Daily Express

“Danny Baker presided over one of the most polite discussions in television history. Where was the passion? Where was the argument? It’s very rare that I catch myself thinking I could do with Paul Morley getting pretentiously antsy with someone on the Review Show for failing to appreciate the post-structural semiotics of early Clash, but this was one of those moments… Sixty minutes of four people sitting in a circle agreeing with one another is a very long hour of television… To make matters worse, we were never allowed to hear any excerpts of the music that Baker and the others had chosen… The programme felt thin and unbalanced without it.”
Sam Wollaston, The Guardian

“It wasn’t exactly a tidy programme. There was the odd grinding gear as Danny shifted between studio chat and the autocue set-ups for the drop-in films (never an easy transition) and his own recommendations for the album hall of fame he was constructing seemed rushed and a little peremptory (nobody got a chance to disagree). But for any viewer with fond memories of sliding a record from its sleeve, it certainly captured the distinctively physical pleasure of LPs, something more than mere nostalgia.”
Tom Sutcliffe, The Independent

The Year of Making Love, BBC3

“It began with a match-up session, all raking spotlights and strobe-induced delirium, at which 100 singletons were paired up, notionally after scientific analysis of their compatibility by two resident experts, Tomas Chamorro-Premuzic and Emma Kenny… In what followed, we were not once troubled by an explanation of the methods the two experts had employed to establish the compatibility of their guinea pigs, or by any theory as to what compatibility might actually consist of. Instead, we just tagged along on a series of dates of varying success, as the participants laid waste to their own privacy.”
Tom Sutcliffe, The Independent

Dancing on the Edge, BBC2

“Yesterday’s episode was a little repetitive, as Louis’s band continued to charm its way to stardom, but there were lovely set-pieces such as the audience with the artichoke-breakfasting Lady Cremone icily played by Jacqueline Bisset.”
Andrew Billen, The Times