TV Critics: Peter Kay’s Car Share; The Trouble With Our Trains; Inside No.9 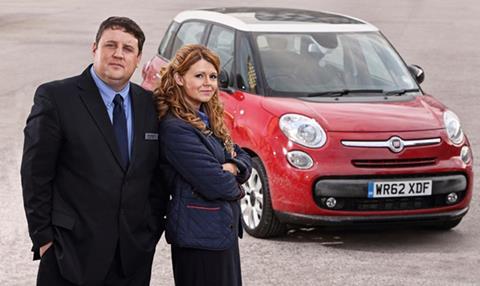 “Car Share represented a triumphant return to TV form for Kay. This was comedy about everyman and everywoman, broad in appeal, aimed at everyone, leaving daft grins on their faces. The BBC has been seeking a mainstream sitcom to succeed Miranda and file alongside Mrs Brown’s Boys. Car Share could well be it.”
Michael Hogan, The Telegraph

“It doesn’t start well but it gets better, when it doesn’t try too hard to be funny, and it’s just the two of them talking, coming round to each other, awkwardly, sweetly, along to 90s music and crap adverts on Forever FM. Not hilarious, but nicely observed and performed.”
Sam Wollaston, The Guardian

“It is the mise-en-scène that provides the greater pleasures: the cheesy Eighties hits played on Forever FM, the radio commercials and the mundane landscapes of suburban Lancashire occasionally relieved by a surrealist touch. I’m along for the ride.”
Andrew Billen, The Times

“If you enjoyed last night’s opener, don’t bother looking now for the next five parts on iPlayer. They’ve gone. Apparently it’s not enough to pay the licence fee these days: to get the full benefit of the shows you’ve paid for, you have to be cool and trendy. That’s a shame, because the script is sharp and Kay’s performance is completely natural.”
Christopher Stevens, Daily Mail

Nick and Margaret: The Trouble With Our Trains, BBC2

“Nick and Margaret ride trains and meet people, narrating each other’s sections, rather sweetly. But the people are mostly grey, middle-aged railway men and financial analysts. It’s not the Apprentice. Maybe that’s the answer: get Alan Sugar involved.”
Sam Wollaston, The Guardian

“In the past I have been suspicious of this pair’s shtick. Here, however, the business savvy of Alan Sugar’s former henchmen was appropriately directed to a privatised business notable for its poor performance, its lack of innovation and its £3.8 billion annual public subsidy. The investigation was thorough, enterprising and sometimes despairingly funny.”
Andrew Billen, The Times

“This forensic look at the British railway system, if I’m honest, felt a bit heavy going the week before the election.”
Sally Newell, The Independent

“With their quizzically cocked eyebrows, stylish scarves and affectionate teasing, our hosts made engaging company. Unfortunately, their film was frustratingly inconclusive.”
Michael Hogan, The Telegraph

“If the BBC don’t give Inside No.9 a third series I am going to chain myself to Lord Hall of Birkenhead until he personally intervenes. Every minute has been a finely crafted pleasure. Even at its most terrifying, it’s incredibly funny.”
Chris Bennion, The Independent

“Inside No.9 ended its run with a story that, I kid you not, had me waking up and fretting in the middle of the night. This show is a faith restorer for those who love TV drama.”
Matt Baylis, Daily Express