“Mamet’s drama feels essentially dishonest, pretending to a candour that it doesn’t actually possess.” Read on for the verdict on last night’s TV. 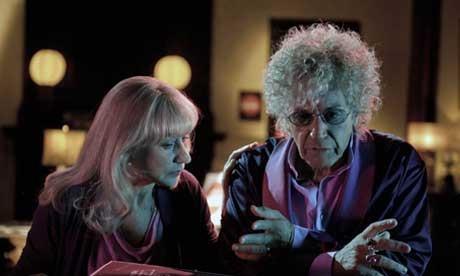 “Phil Spector is never less than competent, a drama of forensic inquiry that understands exactly how to manipulate an audience and which – when it hones in on the techniques of a high-profile American defence – is often fascinating. It also gives Al Pacino a rich opportunity to supply fresh material for Pacino impressionists. But Mamet’s drama also feels essentially dishonest, pretending to a candour that it doesn’t actually possess.”
Tom Sutcliffe, The Independent

“Phil Spector was highly watchable, even compelling. It might even have been admirable had it not been for a script that expended most of its energy in angry disquisitions on how America’s rich and famous can no longer expect justice in court due to the envious public and a dishonest, celebrity-obsessed press.”
Gerard O’Donovan, The Telegraph

“Al Pacino potrayed Spector as a ranting showman in need of an audience but uncomfortable if its size exceeded one… But this show was all Mamet… The theatricality of the scenes, often in darkened mock courtrooms and with props that included a replica of Lana Clarkson herself, directly spoke to his vision, as articulated by his Spector, of justice as a theatrical event.”
Andrew Billen, The Times

“I have a tricky relationship with TG. Obviously I loathe it. For the Three Chumps who present it; for the car oafs in the studio audience; for the millions of twerps in the country, and the billions of idiots worldwide, who watch it; for its phenomenal success… The bits I appreciate – OK, I like – are the stunts… It’s stupid, pointless, puerile, proves nothing. And – I’m afraid, for exactly those reasons – really rather entertaining.”
Sam Wollaston, The Guardian

“Even if I were the target market for Top Gear, I wonder if I would find it a compelling watch from start to finish. It’s anchored from a studio, with a live audience. They have to stand around, a bit like the Top of the Pops audience, but without the dancing to stop them looking quite so awkward. The studio echoes, which means that the chatty bit in the middle was, with the darkened studio audience hopping invisibly from foot to foot, just excruciating.”
Neil Midgley, The Telegraph

“Last night was quite short on nudity but good on anomalies and excellent on plotting… Throw in a bit of spell-making from the women, which resulted in a storm being whipped up to fatal effect across the Channel, and it was a corker.”
Virginia Blackburn, Daily Express

“As if to reward any men still with this bloodlessly female-skewing saga, Elizabeth untressed herself and allowed what we scriptwriters call a ‘fleeting glimpse’ of a nipple. Ta.”
Andrew Billen, The Times

“A massive thank-you to Canadian crooner Michael Bublé for sharing his blessed life with me, in Michael Bublé’s Day Off. This is his beautiful house and we’re off for a drive in his beautiful car. Hey, we should drop in on Michael’s grandfather who’ll be hanging out with the guys in McDonald’s. Michael’s granddad is pretty much Michael’s best buddy. So is Karen who works in McDonald’s. See, he may be a superstar, but he’s just a regular, down-to-earth guy, like you or me.”
Sam Wollaston, The Guardian

“The Returned is undoubtedly one of the best and most intriguing TV series around. To say it’s a refreshing change from the procedure-obsessed traditional British and American (or even Scandinavian) TV thriller is gross understatement… It is rare these days to come across a drama that can intoxicate with the beauty of its camerawork, and raise goosebumps with a soundtrack (by Mogwai) so moody it hardly needs visuals to send shivers down the spine.”
Gerard O’Donovan, The Telegraph