“Puppy Love is proof positive that BBC4’s comedy commissioner is on a roll.” 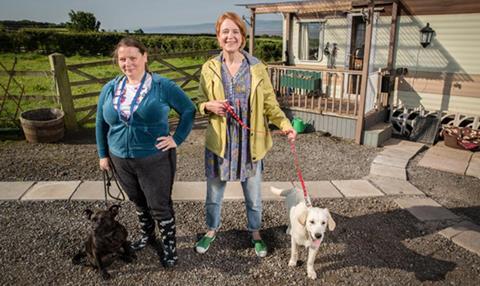 “Puppy Love is proof positive that BBC4’s comedy commissioner is on a roll. BBC4’s decision to cancel Getting On after three series remains a mystery, but if it’s meant this opportunity to see Joanna Scanlan at the height of her powers, perhaps it was worth it after all.”
Ellen E Jones, The independent

“Something of a quiet rebellion is happening on BBC4. First there was Mackenzie Crook’s Detectorists. Now Joanna Scanlan and Vicki Pepperdine have woven a sitcom around a dog training class. Anyone who has ever owned a puppy that believed it was a cat-seeking missile, and that couldn’t tell the difference between a chair-leg and a lamp-post, will spend the show chuckling with recognition.”
Christopher Stevens, Daily Mail

“Pepperdine as the ‘voluntary sector’ grant-giver Naomi and Scanlan as the dog trainer Nana V are nicely realised characters: the Wife of Bath meets the Prioress on a canine pilgrimage to nowhere. Yet there is a disappointing crudeness to it all. I’m only in Puppy Quite Like.”
Andrew Billen, The Times

“Joanna Scanlan amd Vicki Pepperdine’s sitcom deserves a doggie drop for keeping slapstick to a minimum while probing the social awfulness of dog owners having to hang out with other very different dog owners. There might be a bit of high farce in there but in my view this show is barking up the right trees.”
Matt Baylis, Daily Express

“It’s just as unsettling as ever and yet at the same time the protracted cat and mouse game between Stella Gibson and Paul Spector is riveting. Episode two finds Stella Gibson (Gillian Anderson) moving a step closer to catching her man – or does it? This is long form storytelling at its finest.”
Neela Debnath, The Independent

“I am very glad to report two things. One, that The Fall is back and possibly better than ever. And two, Stella Gibson is beginning to crack, which is good news for all of us who were being driven demented by Gillian Anderson’s unwillingness to imbue her character with any human emotion or facial movements.”
Lucy Mangan, The Guardian

“A mind-f*** is what this series is. It is essential for its balance and its sanity that Gillian Anderson’s Detective Superintendent Stella Gibson, Spector’s nemesis (one hopes), remains unpenetrated by him in every sense. I regret to say that yesterday Gibson began to look like one of his victims.”
Andrew Billen, The Times