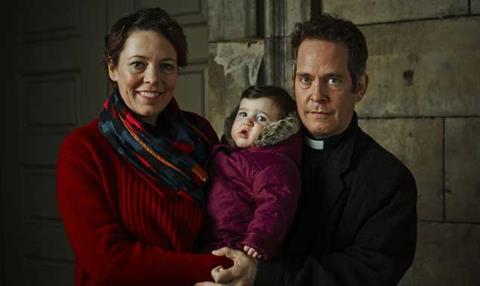 “Rev’s willingness to get stuck in has always set it apart from the bucolic likes of The Vicar of Dibley but also the funnier, yet surrealist, Father Ted. Most admirable is that it never scruples to offend the churchy set in the front pews in pursuit of a punchline.”
Ellen E Jones, The Independent

“The secret to appreciating Rev lies in accepting it’s about the journey rather than the destination. The series offers a payload of breezy laughs without any big comic pay-off. No comic miracles then but lots to keep even the initially sceptical viewer tuned in for the rest of the season.”
Ed Power, The Telegraph

“Hollander and his co-writer/co-creator James Wood punchily mine each moment for laughs and pathos. It’s heartbreaking to see Adam’s attempts at fundraising amount to, basically, a bag full of drug money. It’s also brilliant, believable and fresh.”
Alex Hardy, The Times

“Rev is the most melancholy, depressive sitcom in TV history. On the other hand, it might be the funniest thing you’ve ever seen — that all depends on how bleak your sense of humour is.”
Christopher Stevens, Daily Mail

“The performances are wonderful. It’s clever – smartly written and sharply observed. It may even say something – not just about a profession struggling for relevancy itself in the modern world, but about a place and a time, Britain today.”
Sam Wollaston, The Guardian

“Episode two of the three-part dramatisation was rescued by Shearsmith. Though the pacing dragged and the story unfolded with grim predictability, the former League of Gentleman star slicked up the screen with slithery menace.”
Ed Power, The Telegraph

“The dialogue had grown clunkier since last week’s opener, and the presentation camper. Had the presentation overall got too cartoony to feel at-heart authentic? Sometimes. Next week’s finale will be the decider.”
Alex Hardy, The Times