“A mix of fascinating science and infuriating gimmick.” Read on for the verdict on last night’s TV. 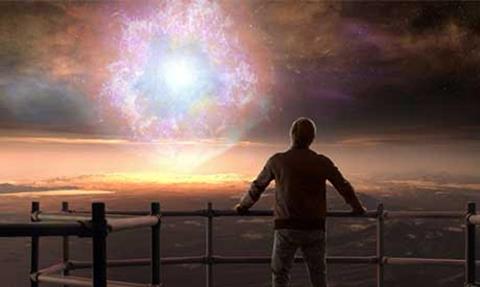 “Hammond’s plan was evidently to entertain with action, rather than awe. There were lots of fast cuts and CGI effects… We were also asked to consider several exciting counterfactuals: what if the Moon was a little bit closer? What if the Earth was a little bit wobblier? And, implicitly, what would happen if you tried to make an Armageddon-style disaster movie on a parsimonious BBC budget?”
Ellen E Jones, The Independent

“Hammond’s lack of expertise wasn’t the real problem here: he was warm, engaging and capable of drawing out insights from the scientists he interviewed… It was rather the whole set-up, a mix of fascinating science and infuriating gimmick.”
Ceri Radford, The Telegraph

“It’s Top Gear science, how our planet came about for a Top Gear audience. Nothing wrong with that. It did mean that I didn’t have any problems getting my head round anything… But it is maybe symptomatic of the Topgearification of all television.”
Sam Wollaston, The Guardian

“Part of the problem with Hammond’s planet-building was that so much of it was mere animations. That made you wonder whether any of the show’s spectacular pictures could be trusted. Perhaps all had been faked, or at least enhanced. In the end, the only contributor who seemed entirely trustworthy was a garden ornament called Dr Gnome.”
Christopher Stevens, Daily Mail

“Despite the unpromising title, Richard Hammond Builds A Planet kept me permanently rooted on the firm soil of comprehension by treating me like the idiot I am at every stage, and I was very grateful for it.”
Matt Baylis, Daily Express

“A series which has stretched plausibility like a fat child jumping on a trampoline. Let us not quibble, however. Unflinching adhesion to logic is not the best frame of mind for watching Downton, which should be enjoyed with a few schooners of sherry and an ice bucket full of salt.”
Ceri Radford, The Telegraph

“I still find many of the threads slow-moving enough for dust to settle on… Amid the tepid stuff, though, there’s some proper pepper firing itself up.”
Alex Hardy, The Times

“I hope David Cameron, William Hague, Prince Charles and everyone else going to the Commonwealth heads of government meeting in Sri Lanka next week saw the shocking No Fire Zone. And that perhaps, when they’re shaking the hand of President Rajapaksa, they’ll remember some of the horrific images of the thousands of Tamils lured to so‑called safe havens and slaughtered by his government’s forces.”
Sam Wollaston, The Guardian

“Six episodes in, and the combination of humour, adventure and pick’n’mix classics in Atlantis continues to deliver quality family entertainment.”
Ellen E Jones, The Independent

“Last night’s episode saw Toast hired by a wealthy Middle Eastern client to star in a film called Prince Philip Scoundrel Dog…This was genuinely hilarious but it seemed to run out of gags early on. Great ideas, like great actors, need great lines and there just wasn’t enough of them in this sitcom.”
Matt Baylis, Daily Express

“The third series of Homeland started patchily – which is putting it kindly – but finally cranked into gear with a crackling episode full of plot progression, fizzing dialogue and toe-scrunching tension.”
Michael Hogan, The Telegraph