“It felt like the script had been on and off the opiates.” Read on for the verdict on last night’s TV. 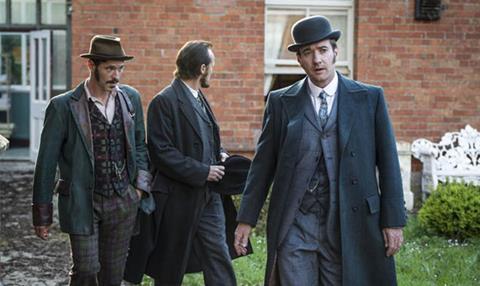 “Ripper Street could have been a horrible show. Its rapid cuts are nauseating, and the incessant soundtrack clobbers viewers around the ears for the full hour, never letting up. But there is something irresistible about its gumption and swagger.”
Rebecca Nicholson, The Guardian

“This plot – about a Dangerous New Drug in Town – was as hackneyed as they come, even if the close-ups of hypodermic syringes piercing skin were quite bold for the Beeb. Still, the leads were all as watchable as ever in their slightly absurd way.”
Mark Monahan, The Telegraph

“From the Dockland street markets hung with red lanterns to the silk-strewn cat-houses, Ripper Street is visually ambitious. But the script was lazily strung together — a fault common to almost all British period drama at the moment.”
Christopher Stevens, Daily Mail

“With its underground drug labs and police busts the show was going for an effect that made no historical sense. Opium and its various deadly derivatives were, as characters mentioned in the script, not illegal at that point… [Users] could quite easily just have gone down to a shop and bought it, very cheaply.”
Matt Baylis, Daily Express

“There is certainly enough tension set up to propel the series for another seven episodes – but only if you can tolerate the erratic speech patterns for that long. It felt like the script, too, had been on and off the opiates.”
Alex Hardy, Ripper Street

“Ripper Street’s stuffy period dialogue gave them lines like, ‘It is a purgatory which grows by increment’ (translation: ‘It’s a bit rough round here, isn’t it?’) and ‘You think him caught getting his jollification?’ (translation: ‘His trousers round his ankles.’) Matthew Macfadyen as Inspector Reid is the only cast member naturally stiff enough to really get away with talking in that peculiarly strained fashion. That’s why he’s the star.”
Ellen E Jones, The Independent

“Series four kicked off with the tale of a plan to raid a drug dealer’s Columbian hideout, and featured (among other things) a bullet in the head, bared breasts, a throat-slitting, more breasts, a fair bit of swearing, even more breasts (in flashback! Pure art-house), and enough discharge of military ordnance to win or else start a third World War. It’s all quite moronic, borderline offensive, and yet not quite as un-diverting as it should be.”
Mark Monahan, The Telegraph