“The ostentatiously ticking bomb unfortunately summoned to mind that market leader in instruments of destruction, Acme Products.” Read on for the verdict on last night’s TV. 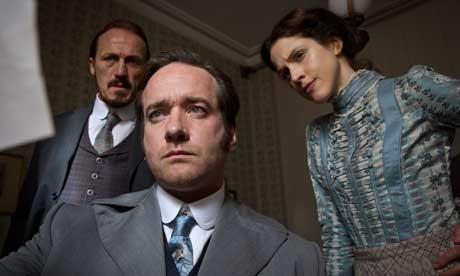 “Ripper Street has been growing on me a little, after a first impression that its version of Victorian London was a bit cut-and-paste and cardboard theatre. It’s thickening up quite nicely and it’s partly the plot that has done the thickening, the cornstarch of unresolved griefs, unrequited love and undisclosed secrets all doing their bit to stiffen the mixture… It wasn’t all plain sailing. The final denouement unfolded with the help of one of those obliging villains who overshare during a triumphant cackle, thus giving the hero just enough of a clue to do some gallant last-minute thwarting. And the warehouse containing the crates marked ‘Arsenic’ and the ostentatiously ticking bomb unfortunately summoned to mind that market leader in instruments of destruction, Acme Products. But I can at least now see what its growing audiences see in it.”
Tom Sutcliffe, The Independent

“There was, ridiculously, an Edwardian bomb, a Heath Robinson affair made from clockwork dials, disarmed, eventually by a screwdriver. It was hard not to feel at this point that there was a joke, and that the joke was on us the audience for going along with it. ‘Look, see, we’ve turned it into Spooks in bowler hats,’ a mocking voice seemed to be saying, ‘and you fell for it’. Fell we did. And next week we’ll be watching something else.”
Matt Baylis, Daily Express

“It was richly funny, but the saving grace of all this voyeurism is a kind of charity in the edit, which allows you to see Christian’s anxieties as well and foregrounds the affection of his colleagues. Or rather ex-colleagues, Mark having finally nerved himself up for a confrontation he should have had months ago. It’s really not looking good for the Grosvenor, but it’s still just as touching and engrossing to watch things going bad.”
Tom Sutcliffe, The Independent

“Apart from trying to be too cool, it’s pitched just right (perfectly?) for someone who is interested and likes music, but doesn’t know a huge amount about it. Neither patronising, nor over-scholarly.”
Sam Wollaston, The Guardian

“None of the original principal characters remain… But all the wit, the charm and the beauty seems to have survived the changes. The sum is greater than the parts. And the creator – Toby Whithouse – is greater than any character or actor. You can go on winning with a different cast, just ask Alex Ferguson.”
Sam Wollaston, The Guardian