“Surprisingly upbeat, and, in its own way, feel-good.” Read on for the verdict on last night’s TV. 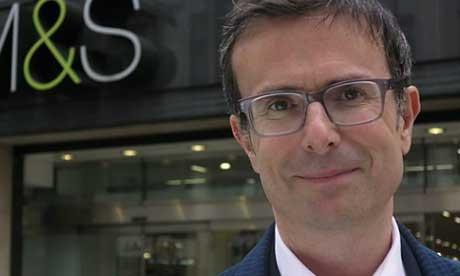 “The BBC’s Mr Business takes us from drab queuing and stifling resale price maintenance, through M&S, the dawn of the supermarkets and clever ideas such as Chelsea Girl andNext, to out-of-town superstores, and the full-on shoulder-padded consumerism of the 1980s. Buy buy buy, in order to define who you are.”
Sam Wollaston, The Guardian

“Given the self-loathing it could have induced, the hour-long romp through Britain’s retail culture show was surprisingly upbeat, and, in its own way, feel-good.”
The Independent, Arifa Akbar

“This doc just looks as if he got out of the wrong side of the bed, every day. How is it possible that enough people like this series that it has made it to series six? I know he’s meant to be a grumpy old so-and-so (that’s the whole point of the show) but to get away with being a misanthropic doctor you must have hidden depths.”
Virginia Blackburn, Daily Express

“Even the surprises aren’t surprising. Such as the Doc and Louisa’s wedding, this time round more successful. It- and indeed everything else- comes bounding at you, wagging and barking like a big friendly Labrador, in about 18995. Which is, of course, what Martin Clunes is.”
Sam Wollaston, The Guardian

“This show will never win awards for edginess. What elevates it, though is the proper sadness to Clunes’s character, which really offsets the sugar. His eyes, jowls and endorphins remain set to a permagloom regardless of which local has fallen off a ladder this time. As he settles into marriage, may the theme remain many miserable returns.”
Alex Hardy, The Times

Under the Dome, C5

“Three weeks in and in Under the Dome matters are shaping up nicely. Now a second teenager has a strange fit that involves lying comatose and reciting over and again ‘The stars are falling.’ The Dome certainly isn’t. Plenty of entertainment lies ahead.”
Virginia Blackburn, Daily Express

“Oh Jamie, you can be just a teeny bit twerpy and irritating, sometimes rub up the old brisket mothership the wrong way-if you know what I’m saying-but you are a little brilliant too.”
Sam Wollaston, The Guardian

“The first run had been accused of that key Sorkinism of having far-too-smart dialogue. In an hour, I learnt about issues ranging from the Quake hand signals adopted by Occupy Wall Street movement and ethical argument around the use of drones to the meaning of The Who’s You Better You Bet and the history of Broadway theatre. A little more than you ever get from the average edition of Newsnight, even.”
Alex Hardy, The Times