“Rockin’ Decades was a pub argument taken into a TV studio.” Read on for the verdict on last night’s TV. 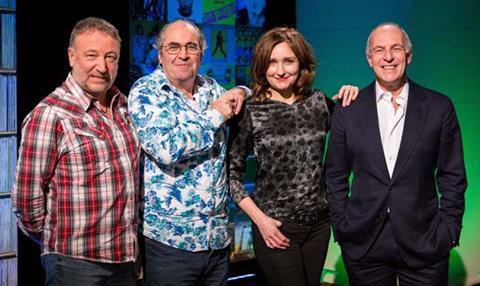 “The talking heads on Danny Baker’s show benefited from being just that – heads having an actual talk with each other, rather than being static to-camera affairs. Rockin’ Decades, really, was a pub argument taken into a TV studio.”
Alex Hardy, The Times

“As with all these musical nostalgia-fests, the creation of a brand new cultural paradigm is less important than whether it has you rifling through old LPs in search of an underrated masterpiece you haven’t heard for years. Danny Baker’s Rockin’ Decades and its companion show, Danny Baker Rocks, had exactly that effect.”
Ellen E Jones, The Independent

“A fine, historically revisionist programme, but marred by the fact that while we heard panellist Peter Hook’s Joy Division, we didn’t hear Viv Albertine’s combo the Slits.”
Stuart Jeffries, The Guardian

“On Mars there are dust storms that can last for months, no drinkable water and the hotels haven’t been built yet. Plus, as Nasa’s rocket scientist Dr Adam Steltzner disclosed, he hasn’t yet worked out how to get humans off Mars and home. All things considered, probably best to staycation.”
Stuart Jeffries, The Guardian

“It was hard not to be a cosmic killjoy. I don’t know how much all this research and development is costing. I do, however, know how little, by comparison, a mosquito net costs and a course of anti-retroviral drugs and a solar panel, all things with immediate positive results here on Earth.”
Matt Baylis, Daily Express

“A beautifully shot documentary by directing team Fred & Nick (Frederick Scott and Nicolas Jack Davies). What raised this film out of the ordinary was the quality of the filming and an unflinching approach that got to the heart of each individual, without judgment, and what ‘payday’ meant to them.”
Gerard O’Donovan, The Telegraph

The Life of Rock with Brian Pern, BBC4

“Pern could easily have felt like a redundant update of Spinal Tap or Bad News. It felt fresh, though, partly because alongside its oddball individuals we saw a sharp skewering of the music industry itself.”
Alex Hardy, The Times