TV Critics: Rovers; Last Whites of the East End; The KKK: Behind the Mask

“Evo-Stik league comedy: too depressing to be amusing.” 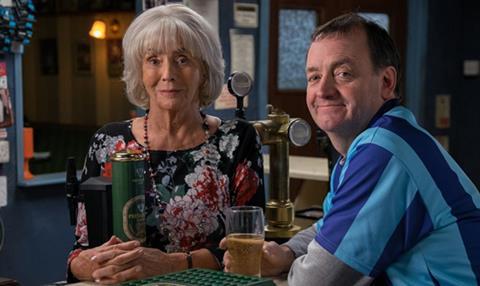 “Unfortunately, the inventiveness of the writers Joe Wilkinson and David Earl could not match this found comedy. Sue Johnston struggled to find something interesting in dotty, warm club manager Doreen. Her Royle Family co-star Craig Cash, when talking about his divorce, momentarily discovered depth in the devoted fan Pete Mott, but it passed. Evo-Stik league comedy: too depressing to be amusing.”
Andrew Billen, The Times

“Rovers sticks closely to The Royle Family model, gently poking fun at people’s mundane observations. However, the writing sometimes got lost amid the gaping silences as the almost exclusively vacant cast of characters reacted to everything at a snail’s pace. The triumph of the recent Car Share might have reignited interest in warm-hearted comedy, but, at the moment, Rovers feels too mild.”
Jonathan McAloon, The Telegraph

“I know it is unreasonable to disparage something on the grounds that it’s not The Detectorists. But it does prove that such lightness of touch is incredibly hard to get right. That said, this new sitcom will give pleasure to many and any excuse to have Cash back on TV is fine by me.”
Julia Raeside, The Guardian

“Kelly Close’s film was emotional and not only because it brought home that if you want to experience the ‘real’ East End, you need East Enders. The question subtly posed by this complicated, sympathetic film was whether it was green fields or white faces Newhamites were seeking out. The equally subtle answer acquitted the migrants of racism.”
Andrew Billen, The Times

“This one-off documentary could have been a shallow requiem for the demise of pie ’n’ mash and Pearly Queens. Instead, it showed the difference between influx and assimilation, the way London has worked for 2,000 years, and the nightmare of mass migration – a system that fails everyone.”
Christopher Stevens, Daily Mail

The KKK: Behind the Mask, Channel 5

“There was some beer-fuelled nonsense about the Zionists and racial purity but the party-goers generally sounded less like supremacists and more like whites with a huge inferiority complex. Their whingeing reminded us the real reason for the pointy hats had been cowardice, small-town thugs hiding their identities. Behind the mask there’s little to fear.”
Matt Baylis, Daily Express