“This tender and illuminating film gave us a sense of the inner and outer worlds of centuries of royals.” Read on for the verdict on last night’s TV. 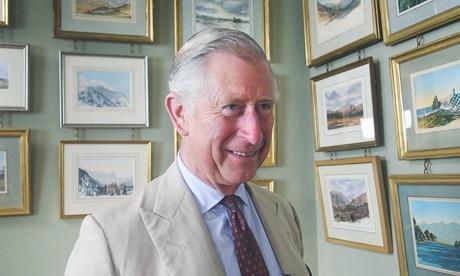 “This tender and illuminating film gave us a sense of the inner and outer worlds of centuries of royals, and what we saw were bloody battlefields, uninhabited buildings, sketches of lonely and over-dressed children, and dozens of empty landscapes.”
Frances Wilson, The Telegraph

“The greatest revelation of all was Charles. There was a period when the prince would year after year get something in the Royal Academy Summer Exhibition and the critics would tell us how amateurish they were, but, actually, his landscapes – chilly snowscapes in Scotland, African deserts, Lochnagar – are rather good, aren’t they? The only downside to this entirely engaging documentary is that it robs the educated middle classes of the pleasure of describing the Windsors as philistines.”
Andrew Billen, The Times

“Perhaps the true knack of this programme was that, by revealing some of the royal artwork, it couldn’t help but reveal corners of the people who created it. That was just as true of Prince Charles, whose moody Scottish watercolours echoed a surprising, doleful sense of humour.”
Matt Baylis, Daily Express

“I don’t mind Charles on this sort of territory, his territory, his ancestors, painting, royal trips, gifts he has received from abroad – a bear from Russia and a yak from the Himalayas. And on his beloved hills and lochs and light and all that. It’s harmless, quite endearing, even.”
Sam Wollaston, The Guardian

“I wasn’t entirely convinced, as the programme claimed, that we’d ‘discovered another side to the Prince of Wales’ (though there was something poignant about his longing to leave some personal impression of his soul behind him, as if his pre-booked place in the history books could never be fully earned). But I was a little surprised to find myself agreeing with him about the value of learning to draw.”
Tom Sutcliffe, The Independent

“It’s perky, I guess, if you don’t mind that (I do… actually). Oh… and I laughed at the production company final credit, which has a peremptory voice saying “Go to bed”. ”
Tom Sutcliffe, The Independent

The Secret Life of the Rockpools, BBC4

“Part of the success of this documentary was that as a paleontologist Richard Fortey knew what the marine biologists were talking about but as an outsider he did not forget to ask questions on behalf of those of us who cannot tell a cockle from a mussel.”
Andrew Billen, The Times