“I think Sir Arthur would approve, enjoy it too. Hard not to really.” Read on for the verdict on last night’s TV. 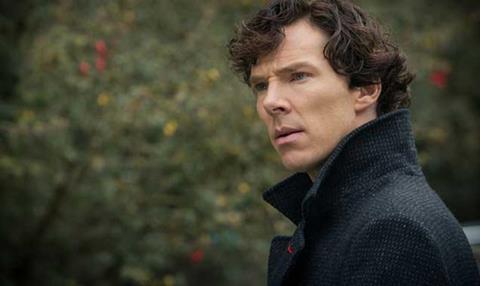 “The episode is packed with explosive sparkle too, fizz and whizz and wit…There may be hashtags, blogs and motorbikes, but the spirit remains in keeping. I think Sir Arthur would approve, enjoy it too. Hard not to really.”
Sam Wollaston, The Guardian

“The problem with Sherlock is the problem with Sherlock himself. They are both so clever they could almost be designed to humiliate the viewer. The cuts, the time-jumps, the twists, the parallel scenes, happen too fast for median IQs to absorb. I say that we must not be intimidated…When a programme becomes a cult, it rarely does that programme much good. There were worrying tendencies yesterday…Yet the work put in on every level, from Mark Gatiss’s script to Michael Price’s score, earns Sherlock the right to self-indulgence.”
Andrew Billen, The Times

“The greatest satisfaction of this thoroughly satisfying season opener was confirmation that Sherlock co-creator Mark Gatiss knows us fans better than we know ourselves. He dangled an easy answer to the fake death conundrum in front of us, then, just as we were realising that the outcome is never as good as the anticipation, he snatched it away again and replaced it with something better.”
Ellen E Jones, The Independent

“This was the triumphant return of the most charismatic, most fun character on British television, played by Cumberbatch with insouciant verve. Sherlock wasn’t flawless but it was brilliant.”
Chris Harvey, Daily Telegraph

“The mystery of what happened in the episode two years ago proved to be a necessary diversion for what was, in truth, a shallow, noisy mess this time round. The all-action Sherlock - undercover in Serbia and enjoying motorbike chases – seemed more suited to the Guy Ritchie film version than the BBC’s, intent on making Holmes into a Jack Bauer/James Bond figure aimed more at America.”
Jim Shelley, Daily Mail