“A profound, chilling, moving piece of television.” Read on for the verdict on last night’s TV. 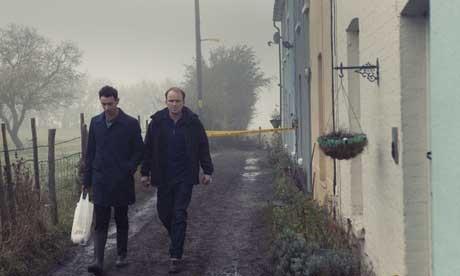 “Tony Grisoni’s study of a tragedy in smalltown England was so masterly in the way it played with time. And in getting into the minds of the characters, individually and collectively, the mind of the town. Plus it felt – and looked, and sounded – so utterly and terribly real. A profound, chilling, moving piece of television.”
Sam Wollaston, The Guardian

“Southcliffe’s power has been its unique insistence on bringing into our living rooms a harrowing sense of the grief, numbness and trauma of mindless murder, shoving it in our faces and refusing to let us look away… But writer Tony Grisoni and director Sean Durkin always backed off from moralising. Instead they gave an amazing cast the means to connect viscerally with audiences and allow the raw emotion of the story to do the work, all the way to its bleakly resigned close.”
Gerard O’Donovan, The Telegraph

“All in all, there was too much time-shifting, too much artfulness. Southcliffe’s use of loud pop music was largely effective but the quayside folk festivals scenes did nothing for me: even Rory Kinnear seemed unsure how to arrange his face. I greatly admired writer Tony Grisoni’s refusal to go down the police conspiracy route, however.”
Andrew Billen, The Times

“GJ’s absurd, Elizabeth Moss’s vowels haven’t convinced and at times Top of the Lake has meandered. But these are quibbles. It has been fabulous. Properly and hauntingly beautiful, genuinely original, worrying and too complex to categorise. Cop show? Thriller? Murder mystery? Morality tale? Study in culture or gender politics? All of the above. It’s a deep, dark thing that sucks you in, pulls you down, then spits you out, gasping and crying to yourself.”
Sam Wollaston, The Guardian

“Some say Holly Hunter, as the anti-guru GJ, steals the show in Top of the Lake, but Elizabeth Moss’s detective Robin snatched it from her on Saturday’s conclusion… In only Hunter and Moss’s second major scene together, she joined the supplicants for GJ’s wisdom. The meeting was so charged it was like watching Brando and Pacino at work together in their garden scene in The Godfather.”
Andrew Billen, The Times

“The Mill had all the bleakness but with neither the beauty nor the substance. A soap opera, basically, set in the olden days. With something of the porridge Mr Timperley serves the workers about it. Put your hand out, splat, there you go, your weekly dollop of misery from Channel 4…”
Sam Wollaston, The Guardian

“That’s it for crisp-linen, soft-porn, heaving-bosoms, phwoar-of-the-roses romp The White Queen. I’ll be honest – I haven’t been with it all along. The finale’s fun though. It’s not just the end of the series, it’s the end of the Wars, one last battle at Bosworth Field, and a turning point in history. I think we all know what happens.”
Sam Wollaston, The Guardian

“The battle scene was terrific, so much so that I couldn’t watch it all, what with limbs flying about the place and fountains of blood. This (the whole series, not just the battle) is what the BBC excels at. Top marks all round.”
Virginia Blackburn, Daily Express

“Low Winter Sun is a gloriously shot and superbly acted portrait of a city in decline and despair. It’s just a shame they forgot to learn The Wire’s most important lesson and leaven all that brooding misery with the odd joke.”
Sarah Hughes, The Independent

“Big School appears to have blown most of its budget on assembling its superstar cast without remembering to give them anything remotely funny to say. Neither as broad as the abysmal The Wright Way nor as abrasive as Mrs Brown’s Boys, Big School is clearly aiming to be a good-natured family comedy, but, in the absence of any actual belly laughs, it relied on tired jokes about streetwise pupils, the too strenuous efforts of its famous cast and the overfamiliarity of the scenario.”
Sarah Hughes, The Independent

“Was there an appalling piece of bias in Casualty? In the last of a two-parter about a gay Iranian asylum seeker called Ramin holding nurse Jamie hostage, the intervention of a do-gooder cased havoc… For me it was a spookily accurate portrayal but this is the broadcaster that criticised John Humphrys for bias when he pointed out some people choose to live on benefits, saying he should have mentioned the opposite point of view as well. Now we have irritating do-gooders portrayed as irritating do-gooders. Where is it all going to end?”
Virginia Blackburn, Daily Express