“The Killing is finished, dead. And second bests don’t get much better.” Read on for the verdict on last night’s TV. 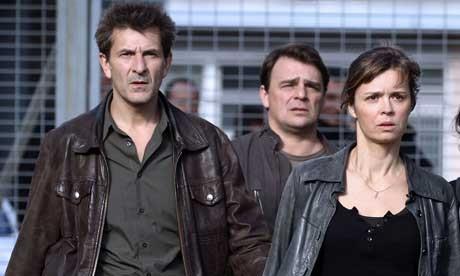 “It can’t really avoid getting compared with its Danish counterpart because it’s gloomy and it’s gritty, its characters are complicated and intriguing, it’s full of twists and turns and dead-ends (cul-de-sacs), and at its heart is a beautiful, flawed female detective with a complicated home life who goes alone into dark scary buildings with a torch… Perhaps it’s not quite as likable and human as The Killing, and Laure Berthaud not quite as beguiling as Sarah Lund. But The Killing is finished, dead. And second bests don’t get much better.”
Sam Wollaston, The Guardian

“Spiral is to The Killing what Slenda is to sugar. It has a moody, disaffected female lead in the form of Captain Laure Berthaud. It has bureaucratic superiors who hinder investigations for political expediency. It even has policemen slicing the night into chunks with the beams of their torches. As a substitute it really isn’t bad, but there’s something about the flavour that just comes across as a little artificial and synthesised.”
Tom Sutcliffe, The Independent

“My only doubts about Spiral spring from my rusty French. Is the acting actually any good? My suspicions were aroused by the performance of Judith Chelma as Sophie Mazerat… She looked like a Baader-Meinhof member, all lank hair and drab clothing. She shot shifty glances, she sulked, she lay around in her underwear smoking introspectively. Chelma’s performance seemed effective, but had the programme been in English I might have thought Mazerat was a crude stereotype.”
Ben Lawrence, The Telegraph

“It’s portrait of France’s diseased urban underbelly is merciless… But the reason we fans are so glad Spiral is back is that the cops and lawyers at the centre of the drama are properly realised figures, much more than the flawed good guys of most cop shows.”
Andrew Billen, The Times

Giant Otters of the Amazon, BBC2

“Lake Salvador is beautiful, and yes, surreal. There’s also something very reassuring that places like it, that take days and days to reach and are the same as they’ve always been, still exist. It’s not just about the giant otters and their ancient scaly nemesis [the caiman]; there’s all sorts of excellent stuff going on – piranhas, scarlet macaws, an ocelot caught on a camera trap, jaguar footprints in the sand. And then an actual jaguar, looking out from the river bank, cool as you like.”
Sam Wollaston, The Guardian

“I rather like this almost religious look at the basis of life. It was more fun than Songs of Praise at any rate. Unfortunately, it felt as if two programmes had been uncomfortably stitched into one… I know all about Madagascar and how species evolve to thrive in certain unique niches, not because I’m very clever but because I’ve watched a lot of telly… Sending Cox there in the wake of every nature-based programme for the past five decades served little purpose.”
Matt Baylis, Daily Express