“It was an immature analysis, better suited to a student newspaper than a hour of primetime BBC.” 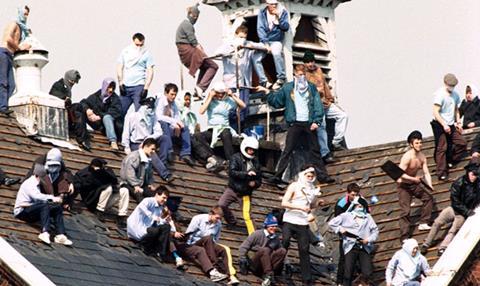 “The documentary, told by judicious computer modelling as well as eyewitnesses, kept its opinions to itself, but I read it as a story of an explosion of anger rather than evil, and, given current prison conditions, an extremely cautionary tale.”
Andrew Billen, The Times

‘Bad’ and ‘rotten’ are two appropriate words to describe the Beeb’s decision to celebrate the 25th anniversary of the Strangeways riot. This was a badly flawed documentary, picking out the quotes from more than a dozen interviews that emphasised the inmates’ grievances while hinting that the prison warders were racist and sometimes drunk — allegations that were raised but never properly examined. It was an immature analysis, better suited to a student newspaper than a hour of primetime BBC.”
Christopher Stevens, Daily Mail

“By interviewing only those involved, the documentary created a vivid sense of the prison as a seething cauldron about to burst. Nevertheless, after 25 years, you felt that both guards and prisoners had settled on their own version of the story and were sticking to it. Ultimately, the documentary ended with the assessment that no lessons have been learnt.”
Adam Sweeting, The Telegraph

“It was a reminder that despite this first episode being almost a shot-by-shot US remake of ITV’s slow-burning, enthralling whodunit, Gracepoint is no Broadchurch. Exciting sealife aside, it’s a watered-down imitation that should have been left alone.”
Sally Newall, The Independent

“It will always be odd watching a remake of a show you’ve recently savoured and Gracepoint follows its source material particularly closely. I’m not sure the acting is quite at the standard of Broadchurch, either, but I am keen on Jack. I’d have imported him into the British original. But not much else, it must be said. Gracepoint underlines that not all remakes are equal.”
Vicky Frost, The Guardian

“The biggest problem with this show is that there’s no crackle between the characters. Shouting can’t disguise that. They’re bored of each other, and we’re bored of them — the spectacular scenery is scant compensation.”
Christopher Stevens, Daily Mail

“In place of Fortitude-style outlandishness or the fetishism of The Fall, DCI Banks prefers the plain man’s view of the world. And who plainer than Stephen Tompkinson, who plays Banks with a morose reluctance that makes Inspector Morse look like Gok Wan. Still. it pushed buttons flashier, fancier programmes can’t reach.”
Adam Sweeting, The Telegraph