“It left the mind not just boggled, but better stocked.” Read on for the verdict on last night’s TV. 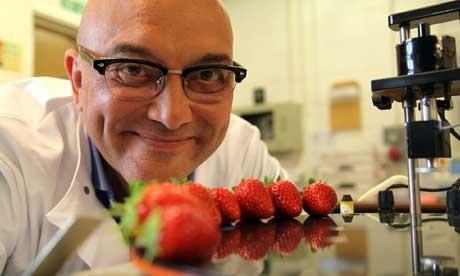 “It was an infuriatingly interesting programme this. Infuriating because you might have hoped for a slightly more questioning attitude to such powerful operators in our daily lives… If you were hoping for anything about the effect of our banana-fixation on the developing economies that supply them, you’d come to the wrong place. But if you could live without that it was fascinating.”
Tom Sutcliffe, The Independent

“Even though our guide found it ‘absolutely fascinating’ inspecting three tiers of ripening bananas in a factory in Basingstoke, the programme delivered little in the way of shocking, revealing or dirty secrets, and without the excitable Greg Wallace pushing us along the conveyor belt, it would have been as monotonous as doing the weekly shop with a trolley with wonky wheels.”
Rachel Ward, The Telegraph

“Why people keep employing this man to shout at viewers and various unfortunates on screen remains a mystery… Summer Supermarket Secrets was essentially one of those filmed-in-a-factory Sesame Street segments extended and presented by Animal.”
Lucy Mangan, The Guardian

“This jaunty documentary was one long gasp at our supermarkets’ ingenuity… but, at least, it left the mind not just boggled, but better stocked.”
Andrew Billen, The Times

“All the zippy legal jargon they bantered around, combined with the jerky camerawork there to convey the franticness of Pope’s life, rendered the programme itself a bit frazzling. In the end, it wasn’t only their clients that Olivia Pope and co were putting into a spin.”
Rachel Ward, The Telegraph

“Scandal is better by miles than Law & Order and all its progeny and not as good as Damages. But it is still so addictive that I had to watch the second episode the kind preview folk had provided as soon as it was finished… It has that elusive, alchemical magic that those in the industry spend their lives chasing and the more it supplies, the greater the craving becomes.”
Lucy Managan, The Guardian

Who were the Greeks?, BBC2

“This is the sort of programme the BBC does best: taking an expert, Dr Michael Scott, with a knack for bringing a vanished world to light and giving him time to explain it to us. No dumbing-down and fascinating with it. Great stuff.”
Virginia Blackburn, Daily Express

“This little series needed to be twice as long to make sense of what it wanted to say. As a result a mini-lecture on Greek philosophy was bent till it snapped into the programme’s general argument… The Greeks, Scott concluded, tying a neat bow over a squished and lumpy baggage, were a rough lot but they, like us, never stopped asking why.”
Andrew Billen, The Times

“There is a small problem with Waterloo Road in that the teachers are far more interesting than the pupils… Angus Deayton is shaping up marvellously as the language teacher George Windsor, essentially playing himself as a disdainful cove surrounded by ignoramuses. Let us hope he is in it for the long haul.”
Virginia Blakcburn, Daily Express