“The film was cursed by an almost embarrassing affability towards its subjects.” Read on for the verdict on last night’s TV. 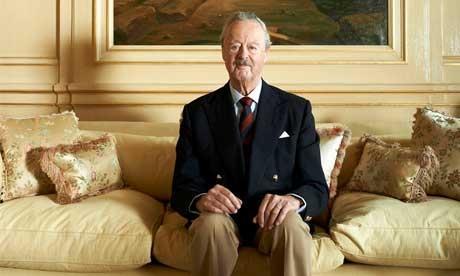 “The film is made by its two principal characters, a father and son double-act, the Sunny and Jamie show. They are also a fine example of how the English aristocracy has had to adapt to the modern world. Now they have a new function: to amuse the rest of us, on television.”
Sam Wollaston, The Guardian

“Although its director Patrick Forbes can be an excellent film-maker and has made programmes on the National Trust and English Heritage, last night the sheer barmy toffness of the Duke of Marlboroough and his boy, Jamie, Marquess of Blandford, appeared to disarm him fatally. His instincts for journalistic inquiry got left in the gun room… His film was cursed by an almost embarrassing affability towards its subjects… We were left with a series of pretty but un-revelatory scenes featuring the starchy duke patrolling his grounds and periodically proposing three cheers for Her Majesty.”
Andrew Billen, The Times

“The programme-makers were granted less access than I suspect they’d have preferred, and resorted to what seemed like selective editing in order to portray Jamie as the feckless idiot they wanted him to be… The show’s juiciest moment did not concern the Spencer-Churchills at all, but their local MP, who came to officially open the new palace gift shop. The MP’s minders would not allow him to be filmed in the presence of the aristocracy, so the programme-makers had to turn off their cameras. The constituency is Witney; the MP was David Cameron.”
Tim Walker, The Independent

“I switched on The Aristocrats with enthusiasm, expecting that, as the broadcaster had promised, I was going to peer through ‘a window on a so-called privileged world’. I can’t really blame a programme for failing to conform to my own fantasy ideals but at the same time I did feel The Aristocrats was a lot humbler than it claimed… Rather than seeing into their intimate lives or getting a broader sense of what it meant to belong to the modern aristocracy, what we mostly got was a re-run of Country House Rescue.”
Matt Baylis, Daily Express

“A hefty budget and a lot of good actors have been thrown at this drama, including the fabulously brooding Marton Csokas in the title role… But the fine performers were let down by a bad story and a worse script.”
Tim Walker, The Independent