“I have a strong feeling that Channel 4 is on to something here.” Read on for the verdict on last night’s TV. 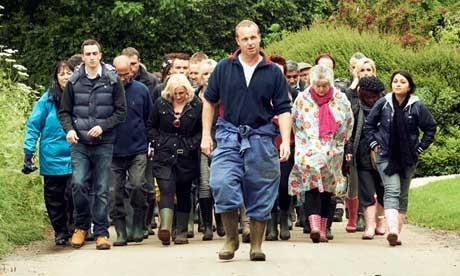 “I have a strong feeling that Channel 4 is on to something here. The format has already been sold to CBS in America, where no doubt it will be schlocked up, and to France and the Netherlands. In Britain, it is low-tech, humane, non-judgmental and more than slightly ridiculous. It worked brilliantly.”
Andrew Billen, The Times

“The Audience may be the maddest idea for a reality show since Big Brother was first conceived… Channel 4 should get another series out of it in five years’ time when it goes back to find out whether the mob ruined lives or improved them.”
Tom Sutcliffe, The Independent

“Watching couples talk earnestly about the price of three-bedroom houses close to St Albans town centre is soothing and soporific, like lying in a warm bath tinged pink by your own blood.”
Tim Dowling, The Guardian

“In its bid to engage us with the science behind the magic it’s like the American forensic drama CSI but with headscarves, rationing and a bit of male-chauvinist piggery thrown in.”
Matt Baylis, Daily Express

“What was intriguing here was the reminder that, provided there was a sense of shared adversity and common purpose, minimum wage and long hours needn’t be incompatible with happiness.”

“The InterCity 125 was well subtitled The Age of the Train… But although the film reminded us how hated BR had become in the 1970s, it erred in failing to say how the story ended.”
Andrew Billen, The Times