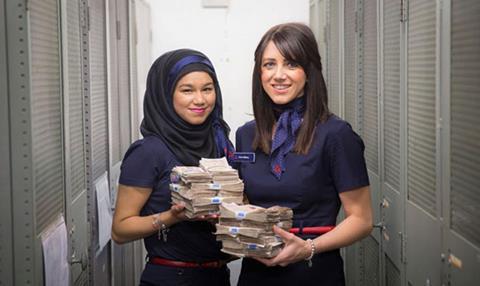 The Bank: A Matter of Life and Debt, BBC2

“The good news is: for the millions who, since 2003, have mourned the demise of The Office, at last there’s a show that attains similar heights of cringe-making workplace absurdity. The bad news is that The Bank: A Matter of Life and Debt is not a comedy.”
Gerard O’Donovan, The Telegraph

“The entertainingly worrying The Bank: A Matter of Life and Debt is, of course, a complete diversion. NatWest is owned by the Royal Bank of Scotland, one of the great villains of the crash. Why were the cameras not filming its head office?”
Andrew Billen, The Times

“A revealing and surprisingly entertaining three-part doc. Acting managee Claire was a little bit annoying and patronising with her team talks and motivational claptrap. But her staff don’t seem to mind, nor the customers. I’d put her in charge of RBS, quick, restore the faith and bring the love back to banking.”
Sam Wollaston, The Guardian

“NatWest’s attempt to portray itself as financial advisers, motivated only by their customers’ best interests, didn’t wash. It’s comforting to know that staff are now incentivised by customer service targets instead of PPI sales, but they were still next to useless when it came to assisting cash-strapped customers.”
Ellen E Jones, The Independent

“Lord knows bankers are unpopular, but these workers were grubbing away at the very bottom of the financial services industry. If the documentary hadn’t been trying so hard to make us like them, we might have been more sympathetic. If they truly want us to be ‘extremely satisfied’, NatWest and the rest are going about it the wrong way.”
Christopher Stevens, Daily Mail

“Don’t Blame the Council lacked the narrative cohesion of the bank documentary, and I was not sure by the end what point it was making. Awarding its own building force a contract to do up council house bathrooms was part of the plan, but wasn’t that just Peter paying Paul?”
Andrew Billen, The Times

“Laugh or cry, these were the only plausible reactions to director Louis Grover’s portrait of life as a Wigan council employee. These days, mounds of uncollected waste are the norm because recycling policies are so confused and we’ve become blasé about keeping the country clean. Grover’s documentary captured these attitudes perfectly, though he didn’t offer us much hope.”
Christopher Stevens, Daily Mail

“Everyone had a little heart on their hi-vis jacket. That was the saddest touch, councils turning into customers, its employees into hi-vis robots, and slapping a heart on, at the end, as if to remind everyone that they we’re all still human underneath.”
Matt Baylis, Daily Express

“It wasn’t just a good title, it was a revealing film about the elusive cougars of Wyoming. They are vanishing in the main because of our conservation efforts. Even when humans help, it seems, we hinder.”
Matt Baylis, Daily Express

“The biggest threat comes not from the harsh conditions, the scarcity of food in the winter, deadly porcupine quills or other four-legged predators, but from two-legged ones, inevitably. Yes, hunting, though I think I’d call it gun crime. Isn’t that the saddest, stupidest thing? Bloody idiots.”
Sam Wollaston, The Guardian