“It was utter tosh: tosh as television drama and tosh as a retelling of the Bible.” Read on for the verdict on last night’s TV. 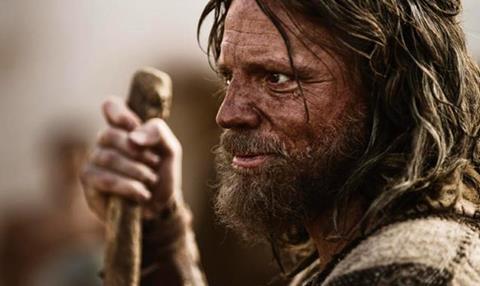 “I’m not ashamed to say that several times during The Bible I cried – with laughter. Don’t get me wrong, I wasn’t laughing at the Bible, just at The Bible. It attracted audiences of 11 million in America, but it was utter tosh: tosh as television drama and tosh as a retelling of the Bible.”
Christopher Howse, The Telegraph

“In the main this adaptation erred on the side of tasteful understatement, an approach that occasionally backfired. Many of the actors were chosen from London theatre, for instance, ‘to avoid distracting the audience with recognisable celebrities’. Such a variety of British regional accents in a biblical Canaan resulted in a few unintentional Life of Brian moments.”
Ellen E Jones, The Independent

“This epic, multi-part adaptation has made wise choices about what to leave out and what to highlight. This began with Noah and his family on the ark, a human group in danger. Who couldn’t sympathise with that, whatever their background, or their feelings about the Bible?”
Matt Baylis, Daily Express

“Victoria Coren Mitchell is a fabulous guide. A fan, of the books, but also of the person… Not too much of a fan though not to see Travers’ battiness and flaws. Or to enjoy the irony that such an imperfect mother, and uncosy grandmother, wrote books about how best to bring up children.”
Sam Wollaston, The Guardian

“Her script was laboured, arch and very, very pleased with itself… But there were moments when she ad-libbed to camera and then her real passion for the subject shone through.”
Christopher Stevens, Daily Mail

“Nine episodes in and the third series of Homeland has reached such dizzy heights of silliness it seems pointless complaining any more about its complete detachment from reality.”
Gerard O’Donovan, The Telegraph

“For the first time in this series, Lewis and Claire Danes, the brainwashed ex-terrorist and the mentally fragile CIA agent, faced each other… Fans who had been hoping that, when Danes and Lewis were reunited, the storylines would be restored to some semblance of credibility are bound to be disappointed.”

“This season, Homeland has become like war itself: stretches of boredom interspersed by episodes of fear… Sadly, even the main plot seems wrong these days. Brody’s mission is to bring Iran back to the negotiating table. Hang on, isn’t that where they now are?”
Andrew Billen, The Times

“If you’re into gaming, then Charlie Brooker’s How Video Games Changed the World would have been pretty much heaven. I’m not. Nor am I a fan of the clips ‘n’ c-words genre of TV… Plus it’s too long. Two hours nearly, a big old trawl through 40 years of gaming history.”
Sam Wollaston, The Guardian

“Charlie Brooker has developed a distinctive narrational style since he started presenting TV and his sardonic segues were the main draw. Sometimes, they were the only thing separating this two-hour documentary from those Noughties nostalgia clip shows which, thanks in part to Brooker, it’s now fashionable to disdain.”
Ellen E Jones, The Independent